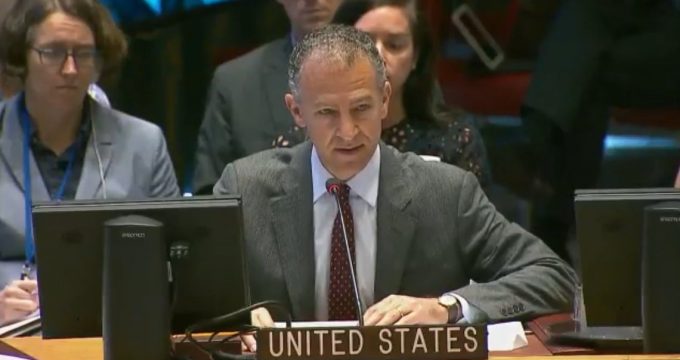 US: Upcoming Mideast conference not aimed at demonizing Iran

AP — The United States said Tuesday an international conference next month to promote peace and stability in the Middle East is not aimed at demonizing Iran, which has denounced the gathering as America’s anti-Iran “circus.”

U.S. deputy ambassador Jonathan Cohen told the Security Council that the conference in Warsaw on Feb. 13-14 sponsored by the United States and Poland is also not aimed at discussing the merits of the 2015 Iran nuclear deal known as the JCPOA, which U.S. President Donald Trump withdrew from in 2018.

He called the ministerial meeting a brainstorming session to “develop the outline of a stronger security architecture” in the Mideast with sessions on the humanitarian crises in Syria and Yemen, missile development, extremism and cybersecurity.

Cohen’s comments followed complaints from Iran directed at Poland for co-hosting the conference and a tweet by Iran’s Foreign Minister Mohammad Javad Zarif denouncing it as a U.S. anti-Iran “circus.” Poland’s foreign minister Jacek Czaputowicz said in remarks published Monday that Iran wasn’t invited and Russia would not attend.

Russia’s U.N. Ambassador Vassily Nebenzia told the Security Council later that Moscow would like to believe the conference isn’t just aimed at one country. He then asked: “Why has that conference not invited Iran, which is one of the most significant and large countries in the region?”

“Attempts to create some kind of military alliances in the region, holding different conferences and focusing on having a simplified unilateral approach to the region that is clearly linked just to Iran, is counterproductive,” he said, “and just pushes further away the prospects of finding a genuine security architecture for the region.”

Nebenzia also asked how it’s possible to have “a genuine architecture without solving the Palestinian issue.” He reiterated Russia’s offer to host talks between the Israeli and Palestinian leaders, stressing that this is the only way to solve so-called final status issues and achieve a two-state solution.

Looking ahead to the Warsaw conference, Cohen said there will be “a dynamic discussion and collaborative thinking with the goal of contributing to a more peaceful, stable and prosperous Middle East.” He added that this would be “a more productive approach” than the Security Council’s monthly Mideast meetings focusing on the Israeli-Palestinian conflict.

“It’s also important to state clearly what this ministerial (conference) is not: It is not a forum to re-litigate the merits of the JCPOA. While we’ve made our concerns with the JCPOA clear, we respect other states’ decisions to support it,” the U.S. envoy said. “It is also not a venue to demonize or attack Iran.”

Pompeo, who recently completed a Mideast tour bringing the Trump administration’s anti-Iran message to the region, said Sunday in Qatar that he hoped the Warsaw conference will allow the world to see “the enormous coalition that is prepared to assist in creating stability and peace here in the Middle East.”