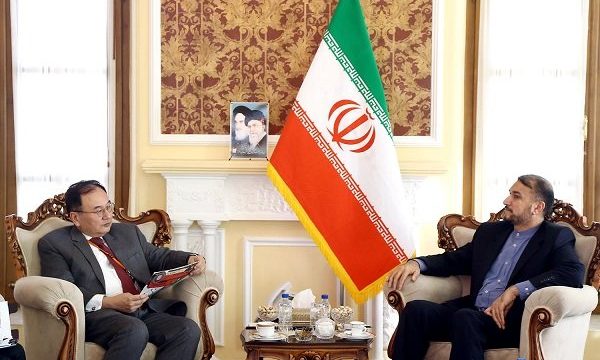 MAN – The newly-appointed Japanese ambassador to Tehran said Wed. that his country welcomes expansion of political, economic and cultural relations with the Islamic Republic of Iran.

Mitsuo Saito, the newly-appointed Japanese ambassador to Tehran, made the remark in a Wednesday meeting with the Special Assistant to the Speaker of the Iranian Parliament for International Affairs, Hossein Amir-Abdollahian.

During the meeting, the two sides noted the 90th anniversary of the establishment of diplomatic ties between Tehran and Tokyo, which was marked and commemorated at the Iranian embassy in Tokyo on January 17, saying the ceremony indicated the deep-rooted relations between the two countries,

Amir-Abdollahian maintained that bolstering parliamentary ties between the two sides will pave the way for expansion of all-out cooperation between Tehran and Tokyo.

The Japanese ambassador, for his part, said Japan always holds in high regard the development of ties with Iran as an influential country in the region with a rich history.

The two sides also highlighted the importance of exchanging parliamentary delegations in a bid to further develop ties.