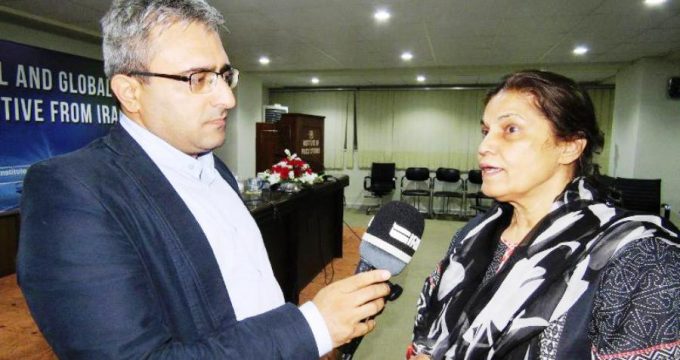 IRNA – A former Pakistani ambassador suggested Prime Minister Imran Khan to embark on a visit to Iran which would have a positive impact on the region.

In an interview with the Islamic Republic News Agency (IRNA), Fauzia Nasreen, former Pakistani ambassador to Poland and Nepal said Iran is an important country of the region and stronger ties with Iran will benefit Pakistan.

She said that with the current Pakistani government there is increased focus on how relations can be improved with Iran. “They are talking about increase in trade and commercial relations,” the analyst added.

Expressing her views, the analyst said initially when Prime Minister Imran Khan took over there was some indication that visit to Iran is something which is in his plans.

“I think the issue is how to manage the border between Iran and Pakistan,” she noted.

Former ambassador said the Iranian side has also concerns about the things that have been happening on border so if that can be managed properly and if trade and commercial interaction can be regulated instead of having illegal trade between Iran and Pakistan, it is going to bring benefit to the government of Pakistan, its revenues will increase and it will also benefit to the people of Balochistan.

The diplomat added that Iran-Pakistan (IP) gas pipeline is a project which needs to be revived.

‘We have historical relations with Iran and Iran has been a very important country as well and in some way if the situation in the Middle East can be pacified I think that also is something which we should be looking at as important members of the OIC and international community,’ she added.

“I think issues between Iran and Saudi Arabia and other issues in the Middle East can be resolved through transparent dialogue which will going to benefit all the countries of the Muslim world and would also bring regional peace,” Nasreen further said.

The expert was of the view that Pakistan would likely benefit a great deal from it. “If you have some sort of normal situation in the Middle East there is tremendous economic potential and all countries and people of this region can benefit from it,” noted the diplomat.

“We would like to benefit from Iran and we want our ties with Iran on upward trajectory,” said the expert on international affairs.

Fauzia Nasreen said Iran is also an important country from the view point of the situation in Afghanistan so that can be another area where Pakistan somehow can get Iran involved more intensely in the negotiations.

“It is also good that Taliban have started talking to Iranians which would help restoring peace in Afghanistan”, former ambassador said.