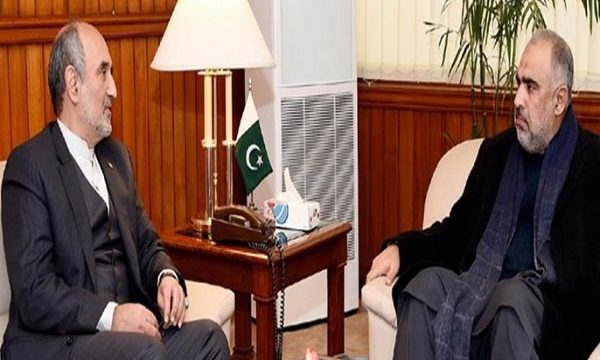 MNA – In his meeting with Iranian Ambassador to Pakistan Mehdi Honardoost, Asad Qaiser Speaker of the National Assembly of Pakistan highly regarded the importance of enhancing relations with Iran.

In the meeting, the two sides discussed bilateral relations in the field of regional and international issues.

Qaisar highlighted the need for cooperation among South-Asian countries to strengthen the economy and reduce unemployment in the region.

Referring to the deep cultural and religious link between Iran and Pakistan, Qaiser said “the expansion of parliamentary ties between the two countries could be effective in promoting bilateral relations and strengthening parliamentary diplomacy.”

For his part, Iran’s Ambassador to Pakistan Mehdi Honardoost, emphasizing Iran’s willingness to increase its all-inclusive cooperation with Pakistan, said close relations with Pakistan are of great importance to Iran.