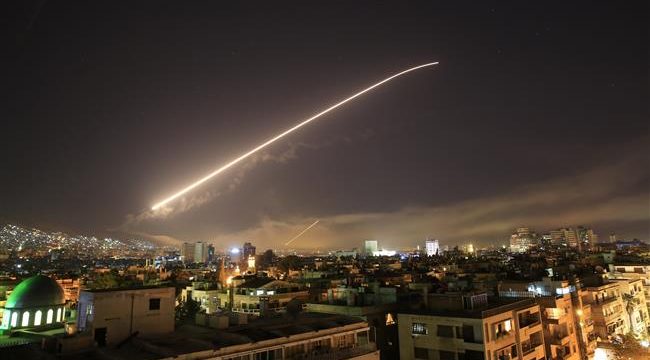 Press TV – Syria has once again written protest letters to the United Nations, urging the world body to take a decisive step and put an end to Israel’s acts of aggression against its territory as Tel Aviv’s hostile strikes are aimed at “prolonging” the crisis in the Arab country.

According to SANA official news agency, the development came after Syria’s air defenses shot down more than 30 cruise missiles and guided bombs during Israel’s aerial attacks in the early hours of Monday.

In two identical letters to the UN Secretary General Antonio Guterres and the head of UN Security Council (UNSC), the Syrian Ministry of Foreign Affairs and Expatriates said the Israeli aerial aggression was an attempt to raise the “morale” of the remaining terrorist hotbeds that are “subservient” to Tel Aviv.

The Syrian government also noted that the Israeli strikes were carried out by the occupying regime in an attempt to escape its “growing internal problems and for reasons precisely known to the international community.”

Slamming the United States for its unbridled support for Israel, the letters said, “Syria affirms that Israel’s persistence in its dangerous aggressive behavior wouldn’t be possible without the unlimited support of the US administration and the immunity provided to it by the US and other Security Council member states.”

The Syrian government also called on the UN Security Council to shoulder its responsibilities as per the UN Charter and take immediate and decisive steps to prevent Israeli attacks from reoccurring, force Israel to respect the Security Council’s resolutions on disengagement, and hold Tel Aviv accountable for its crimes against the Syrians and Palestinians.

On Sunday, SANA cited an unnamed military official as saying that the aerial defense units of the Arab country managed to “thwart” a daylight missile attack conducted by Israeli warplanes against some localities in and around the Syrian capital.

Hours later, SANA said in a separate report that the Israeli regime conducted another aerial aggression in the early hours of Monday in which it conducted “land and air strikes … through successive waves of guided missiles” against the Arab country.

The report added that the Syrian defense system was promptly activated and shot down “most” of the “hostile” projectiles before reaching their designated targets.

The Israeli regime launches airstrikes on the Syrian territory from time to time. Such aggressive moves are usually viewed as attempts to prop up terrorist groups that have been suffering defeats at the hands of Syrian government forces.