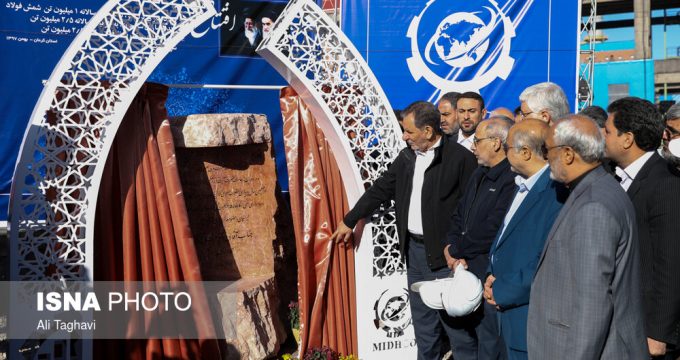 Press TV – Vice President Es’haq Jahangiri believes it is impossible to sanction Iran, a day after saying the country was selling as much oil as it needs despite US sanctions.

“Iran, due to its immense capacities, cannot be sanctioned,” he said during the commissioning of two new steel plants in the southeastern Kerman province Tuesday.

US President Donald Trump ushered in “the most biting sanctions ever imposed” against Iran in August by declaring that “they ratchet up to yet another level” in November when the second round of the sanctions was imposed.

Jahangiri was sanguine, stating that Iran would overcome the coercive measures by depending on its massive capacities. “The Iranian nation, by relying on domestic capabilities and capacities, will defeat the enemy’s sanctions,” he said.

“We need to move the development current to a direction where the enemy realizes that sanctions will have no effect on us,” Jahangiri said.

“We must have a spirit of self-confidence and not underestimate ourselves because Iran is a huge country with vast capacities,” he added.

On Monday, Jahangiri said US rulers had decided to crank up pressure on the Iranian people and confront the Islamic Republic but Tehran was coping with the situation.

“Despite all the American plans to prevent the sale of Iranian oil and transfer of money from Iran and block imports of basic goods such as medicine, we are selling as much oil as we need,” he said.

“And many countries are keen to use Iranian oil and they are buying Iran’s oil. We also transfer money with the methods we know and import basic goods and medicine as much as the people need at the right price,” Jahangiri added.

Trump is targeting Iran’s main source of revenue as well as its financial sector, essentially making 50 Iranian banks and their subsidiaries off-limits to foreign banks.

He has pledged to bring Iran’s oil exports down to zero, but fears of a price rally have forced him to backtrack and give waivers to eight leading buyers of Iranian oil.

Last week, Reuters said the US is likely to extend the waivers in May in order to placate top buyers China and India.

According Amos Hochstein, the former international energy envoy who ran Iran sanctions under the Obama administration, the real reason Trump is giving the waivers is because he is unable to force the biggest customers of Iranian oil to stop buying oil from the country.

“There will 100 percent be exemptions in May,” Hochstein said, adding Trump’s refusal to do so would raise the prospect of the US sanctioning Chinese and Indian companies and getting embroiled in yet another trade dispute.

Even without a waiver, Iranian officials say the country has battened down the hatches.

“With precise planning, we have full knowledge about the problems of the country and the people and have planned to pull through them,” Jahangiri said on Tuesday.

“The government has also planned for the development of the country, the enemy’s plans against us, the economic situation of the people, the export and import, and the management of the people’s lives,” he said.

Officials have said Iran is facing a full-blown “economic war” to bring the Islamic Republic to its knees and bring about a regime change in the country.

The US has put more than 700 Iranian and Iranian-linked individuals, entities, aircraft and vessels on the list of its new sanctions targetting Iran’s oil, banking and transport sectors.

According Jahangiri, while two individuals were previously in charge of Iran sanctions, as many as 400 people in the US administration are now tasked with overseeing the implementation of the measures against Tehran.

The vice president dismissed the campaign, saying “we are looking for dialogue and a logical solution but we not amenable to bullying and humiliation.”

“In the current difficult economic conditions, we have repeatedly told the people that we can cope with the sanctions with a head held high and put these difficult conditions behind us with systematic planning.”