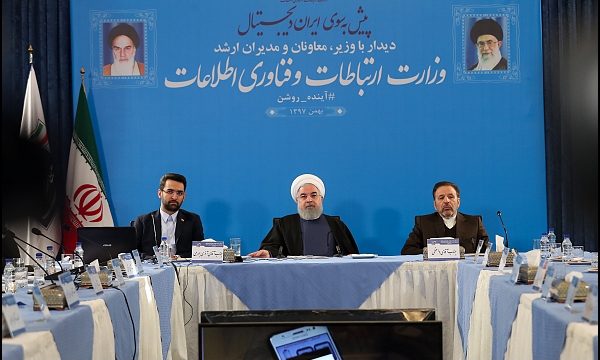 IRNA – Iran’s President Hassan Rouhani said on Monday that confronting the demands and desires of people is a wrong policy which is at the same time both illegal and illegitimate.

In a meeting held in Tehran with senior officials and managers of Ministry of Information and Communications Technology, he said that nowadays people could not be denied access to communications and technological developments in their lives.

The president stressed the need to cultivate the society and teach people how to manage their technological affairs and prevent problems from happening.

He also demanded users to adopt a proper tone in cyberspace communications and adhere to Islamic teachings and moral in their social media interactions.

Whenever extremism is used as a tool in cyberspace, it will gradually transform into a threat, the president added.

Turning to the issue of filtering the internet or cyberspace, President Rouhani said the youth and the teenagers are the first who will be adversely affected by such behaviors.

“Filtering is no solution for problems,” he reiterated.

Elsewhere in his remarks, the President referred to information technology (IT) as a basis for economy and said the Iranian society presently is dependent on it.

The president further noted that a big part of the country’s economy depended on IT and Information and Communications Technology (ICT).

Cyberspace provides an infrastructure for many economic activities and development and creates economic and social justice, he noted.

President Rouhani went on to underline that cyberspace creates a platform for countering corruption.