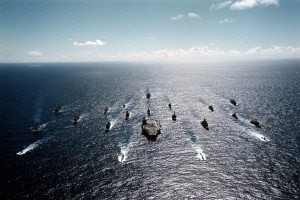 The flotilla, comprising navy’s logistics vessel ship Kharq and Alvand destroyer arrived at the port on Sunday evening after conducting 43-day mission in the Gulf of Aden.

The naval fleet had left Iran’s southern port city of Bandar Abbas for the Gulf of Aden to protect Iran’s interests in free waters.

Over the past few years, Iran’s Navy has increased its presence in free waters to safeguard naval routes and provide security for merchant vessels and tankers.

The Iranian Navy, in line with international efforts against piracy, has also been conducting patrols in the Gulf of Aden since November 2008 in order to protect cargo vessels and oil tankers owned or leased by Iran or other countries.

Iran’s Navy has managed to foil several pirate attacks on both Iranian and foreign tankers in its missions in international waters.