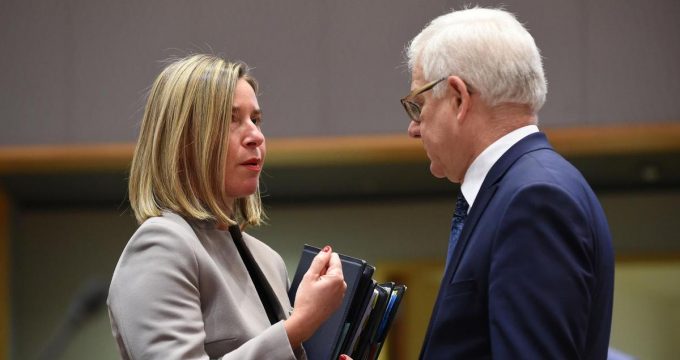 The National – The European Union is moving ahead with plans to overcome US President Donald Trump’s sanctions on Iran.

A meeting of foreign ministers in Brussels on Monday discussed the bloc’s plans to help European businesses trade with Iran despite American sanctions on trade and investment.

EU foreign policy chief Federica Mogherini was charged with setting up a so-called Special Purpose Vehicle – effectively, a non-dollar trading platform – with Iran as Europe strives to keep Tehran in the 2015 nuclear accord which Mr Trump pulled out of last year.

Monday’s meeting comes as European countries also imposed their own punishments on Tehran for its foreign and security policies. Germany banned an Iranian airline from its airspace over accusations it took weapons and advisers to help support President Bashar Al Assad’s forces in Syria’s civil war.

A senior German government source said Berlin revoked the landing rights of Mahan Air because of suspicions it was being used for military purposes by Iran’s Revolutionary Guards, and also on safety grounds.

The EU’s Foreign Affairs Council agenda on Monday is also believed to include discussions on whether it will send EU representation to the coming Middle East summit in Poland, led by the US, on February 13-14.

Ministers from several EU states have already said they will not attend.

Now we know why @FedericaMog is skipping #US–#Poland ‘Middle East’ summit in Warsaw on Feb 13-14. She’ll be at an African Union summit, she says, in Addis. #Iran @SecPompeo

The EU is at loggerheads with the US over the 2015 Iran nuclear deal as it seeks to retain economic ties with Tehran despite the renewed American sanctions.

The SPV is expected to launch later this month but officials warn it will not be operational until later in the year. It will be registered in France, run by Germany and is likely to include Britain as a shareholder.

“There’s a feeling of frustration among Britain, France and Germany, and others, after the first phase of diplomacy with Iran,” a senior EU diplomat said. “We thought we could get some effort from the Iranians in several areas.”

Iran says Europe may not be able to safeguard the nuclear deal anyway and accused EU officials of dragging their feet.

Sanctions adopted earlier this month marked an unexpected shift in European diplomacy since the end of last year. Smaller, more dovish EU countries have joined France and Britain in a harder stance on Tehran, including considering new sanctions.

Those could include asset freezes and travel bans on Iran’s Revolutionary Guards and Iranians developing the country’s ballistic missile programme.