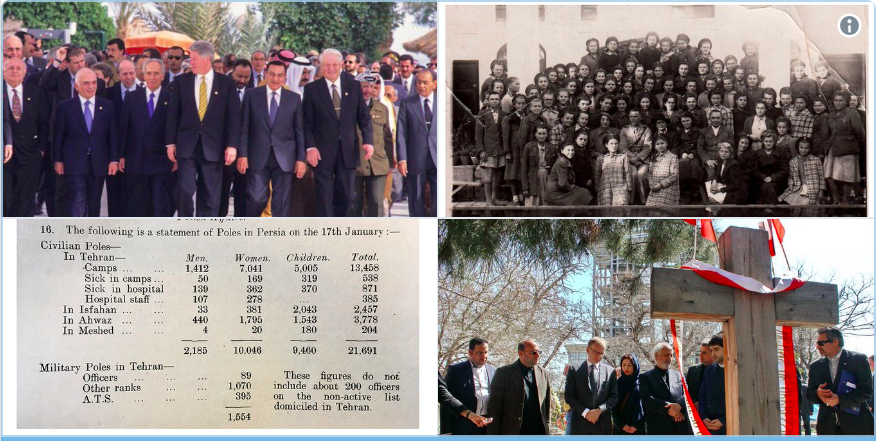 Iranian officials have strongly reacted to an anti-Iran conference due to be held by the US in the Polish capital of Warsaw on February 13-14, condemning it as a “desperate circus” that will disgrace the participants.

Iranian Foreign Ministry has summoned Polish Charge d’Affaires to voice protest over the hosting of an anti-Iran, so-called ‘peace and security in Middle East’ conference by US and Poland in February.

Iran to take necessary measures against any hostile move: Spokesman

Iranian Foreign Ministry Spokesman Bahram Qassemi deplored Poland’s recent decision to host a conference that the US is going to hold against Iran next month, saying that no “hostile” move by any country will go unanswered.

Iran to leave behind US sanctions with endurance

Iranian President Hassan Rouhani pointed to unilateral US sanctions against Islamic Republic specified that Iranian nation would succeed in leaving the sanctions behind.

Leader’s top military adviser Major General Hassan Firouzabadi said that Iran’s advisory presence in Syria continues as far as Damascus is asking Tehran to do so.

Iran not to ask for anyone’s approval for launching satellites

Foreign Ministry spokesman Bahram Qasemi stated Iran’s right to take advantage of all kinds of technologies and said Tehran will ask for nobody’s approval or permission for launching its own satellites.

Iranian Envoy to London Hamid Baeidinejad on Monday denounced Britain’s approach toward the issue of Iranian-British citizen who is serving her time in Iran, describing it as an interventionist act.

The Syrian president and a senior Iranian lawmaker have expressed the two countries’ firm determination to continue developing decades-long strategic relations in order to serve the two nations’ interests in various fields.

Commander of the Islamic Revolution Guards Corps (IRGC) Major General Mohammad Ali Jafari highlighted reasons behind financial problems facing the country and said the Islamic Republic is in an economic war with the enemy.

Chief of General Staff of Iranian Armed Forces Major General Mohammad Bagheri will head a high-ranking military delegation to the capital of the Republic of Azerbaijan, Baku, on Wednesday.

Head of the Atomic Energy Organization of Iran (AEOI), said that Iran has enough resources of 20% enriched uranium and also that the country is able to resume its peaceful nuclear activities.

The Spokesman of Iranian Foreign Ministry Bahram Ghasemi said on Tuesday that Europe has not yet informed when it is going to launch the promised financial mechanism known as the Special Purpose Vehicle (SPV) in order to help Iran continue business under US pressures.

Marzieh Hashemi, a journalist and anchor working for Iran’s English-language Press TV television news network, has been imprisoned in the United States for unspecified reasons.

Enemies seeking to create discontent in Iran via pressures: Minister

Iranian Interior Minister Abdolreza Rahmani Fazli warned of US plots to undermine the country through economic sanctions and said the enemies are seeking to create widespread discontent in Iran by increasing pressures on its people.

Highlighted that Iranian military advisers and weapons will remain in Syria, Islamic Revolutionary Guard Corps (IRGC) Commander warned Israeli regime’s prime minister on Wednesday that he should not ‘play with the lion’s tail’.

Iran calls for release of Press TV anchor in US custody

Iranian Foreign Minister Mohammad Javad Zarif on Wednesday called for immediate release of Press TV anchor who is presently in the US custody.

The Islamic Republic of Iran and Republic of Iran has signed a military cooperation protocol with Republic of Azerbaijan during the visit of Chief of General Staff of Iranian Armed Forces Major General Mohammad Bagheri to the northern neighbor.

A business forum between the Iranian side and representatives from Iraq’s central and southern provinces was held Wed. morning in Karbala in the presence of Iranian Foreign Minister Zarif.

Foreign Minister Mohammad Javad Zarif said on Wednesday evening that Tehran has offered visa-free entry for both Iranian and Iraqi businesspersons and is waiting for Baghdad’s approval.

Araghchi says US not trustworthy due to withdrawal from JCPOA

EU’s High Representative of the European Union for Foreign Affairs and Security Policy Federica Mogherini will not participate at an anti-Iranian summit which is going to be held in Poland, said an EU spokesperson.

Iranian Foreign Minister Mohammad Javad Zarif said US Secretary of State Mike Pompeo does not have the right to interfere in Iran-Iraq issues.”

Iran’s minister of intelligence reminded the Zionist regime of the blows it has received from Iran, saying the Islamic Republic will continue to inflict defeats on Israel in the intelligence arena.

Commander of the Iranian Army underscored that his forces will keep working hand in hand with the Islamic Revolution Guards Corps (IRGC) to foil the US and Israeli plots.

Zarif back home from Iraq

Javad Zarif has again shown his knack for roasting US officials on Twitter, this time mocking National Security Advisor John Bolton for 10 years of calls to attack Iran.

Lebanese resources said on Thursday morning that Lebanon’s government has declined an invitation by the US to attend an upcoming anti-Iran forum in Warsaw.

Iran’s Air Defense commander inaugurated a new radar site in the country’s southeastern province of Sistan and Baluchestan on Saturday.

A senior Iranian military official warned that thousands of ISIL terrorists have been stationed in Afghanistan with the help of the US and certain regional states.

e head of Iran’s Foreign Policy Strategic Council Kamal Kharrazi said Sat. the European Union’s delay in implementing the Special Purpose Vehicle (SPV) to continue trade with Iran despite US sanctions under the pretext of their incapability of convincing European companies is unacceptable.

Iran denies ties to Afghan held in Germany for spying

Iran on Saturday denied having any link to an Afghan-German man suspected of spying for Tehran, suggesting his arrest in Germany was part of efforts to mar EU-Iran relations, the state news agency IRNA reported.

Iranian Parliament will hold a session Sun. to review a report of flaws pointed out by the Guardian Council on the bill on Iran’s accession to the convention against the funding of terrorism (CFT).

Iraq underlines cooperation with Iran despite US sanctions

Iraqi Foreign Minister Mohammad Ali Hakim said on Sunday that despite US unilateral economic sanctions, his country insists on economic cooperation with the neighboring state of Iran.

Iran succeeded in self-sufficiency following the victory of the Islamic Revolution in producing power plants and even some foreigners are seeking gas turbine technology realized by the efforts of Iranian industrialists and scientists, the Minister of Energy Reza Ardakanian said on Sunday.

Special Purpose Vehicle (SPV) will be launched in a short time, a European official said on Thursday.

An official at the Trade Promotion Organization of Iran has called on Europe to cut down to zero the tariffs imposed on the import of Iranian goods, saying the move would send a message that Europe is serious about expanding trade with Iran.

State-run Chinese energy giant Sinopec has offered Iran a $3-billion deal on further development of an Iranian oilfield the two countries are already working on, the Wall Street Journal has reported.

US experiencing regression in ME: Lebanese Hezbollah

The visit by US officials to the region will not cover up Washington’s regression in the Middle East, , member of the executive council of Lebanon’s Hezbollah Movement recently said.

Jordan has announced that it will host a round of UN-brokered negotiations between delegates from Yemen’s Houthi Ansarullah movement and representatives loyal to former Yemeni president Abd Rabbuh Mansur Hadi to discuss a prisoner swap deal between the two warring sides.

Terrorist war against Syrian people no longer limited to Syria

Syrian President Bashar al-Assad said the terrorist war waged against the Syrian people is no longer limited to Syria only and this underlines the importance of cementing the Syria-Russia relations at this important stage of the region’s history.

Upcoming Astana meeting to be held in 2nd half of Feb.: Moscow

Russian Foreign Ministry announced that the upcoming Astana meeting on crisis in Syria would be held in the second half of February.

Russia has warns Israel against carrying out airstrikes near the Damascus International Airport in the Syrian capital.

The AUT team in charge of developing the ‘Payam’ satellite has written a letter to President Rouhani voicing their readiness to start working on the construction of a second satellite after the first failed to reach orbit on Tuesday.

A funeral procession was held in Tehran on Wednesday to bid adieu to the 13 Iranian army personnel killed in the crash of a Boeing 707 cargo plane on Monday.

Iranian Minister of Science, Research and Technology Mansour Gholami announced on Wednesday that the country has come to stand atop other world nations in the production of different scientific contents in quantitative terms.

Iran’s Intelligence Ministry seized a big haul of heroin at a southern port destined to Europe.