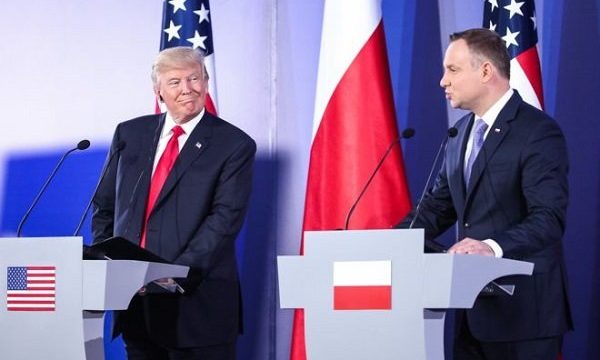 MAN – Commenting on the US isolation and differences with its heavy weight European allies on Middle East, Anthony Cartalucci says that Poland is the only weak and submissive European nation which is forced to host American’s aggression against Iran and Russia.

US Secretary of State Mike Pompeo said that the meeting would focus on international cooperation on Middle East stability and peace and freedom and security in this region, and that includes an important element of making sure that Iran is not a destabilizing influence.

Many experts and officials around the world have expressed their doubt on success of the conference and have announced they will not attend the meeting.

The issue was discussed with Bangkok- based geopolitical researcher Anthony Cartalucci.

Despite having heavy weight allies in Europe like Germany and France, why the US has chosen a weak European country like Poland to host the event?

Washington’s European allies have different ideas regarding the Middle East, especially regarding Iran – the undermining of which drives much of American foreign policy in the region. Poland has a compromised government and is easily coerced by the US – it will eagerly host America’s meeting and politically bolster any outcome the US arrives at. Poland serves a similar, subordinate and submissive role in America’s aggression toward Russia.

US rhetoric accusing Iran of destabilizing the region is a form of political projection aimed at diverting attention away from its central role in doing just that – destabilizing the region. By all accounts the rise of ISIL is a direct result of US military intervention in the region beginning with the illegal invasion and occupation of Iraq in 2003. Many sources including the United States’ own Defense Intelligence Agency suggest the US and its allies intentionally created ISIL to isolate and overthrow the Syrian government when speedy regime change failed to materialize in 2011.

By blaming Iran for America’s own destabilization of the Middle East the US can politically undermine an adversary, deflect blame away from itself, and search for an additional pretext to remain involved in the region.

Will any plan to stabilize the region be successful without Iran?

The US does not seek to stabilize the Middle East. But if we imagine Washington did want to stabilize the region, it would be working with Russia, Syria, and Iran as well as with the Arabian monarchies to create a balance of power within which cooperation and healthy competition could take the place of the deadly and protracted conflict we see today. The fact is Iran has significant influence in the Middle East – which makes sense since it is a large Middle Eastern nation. That the US refuses to recognize this or work with Iran helps to further understand the true source of what undermines the region’s stability.

How successful do you see the conference?

The fact that the United States was forced to hold the conference in Warsaw – because Poland is the only nation weak and submissive enough to host such an event – already bodes poorly for the US and whatever it hopes to accomplish with the conference. The conference is allegedly aimed at discussing the need to confront Iranian “extremism,” which the US ironically has spent the years fighting by sponsoring terrorist organizations appearing on the US State Department’s own foreign terrorist organization lists.

The conference has been described by the Iranian government as an “anti-Iranian circus.” Honestly, I think there is no better way to describe it.

UNSC is responsible for the peace and security of the world, why is the US trying to lead the international community out of the legal framework of the UNSC?

Like any outlaw – be it an individual or a nation’s government – when laws do not suit them they walk around them. The United Nations and its charter are clearly an obstruction to US ambitions around the globe – including in the Middle East regarding Iran. The fact that the US must not only do this outside the United Nations, but also – now – outside allied circles it has depended on for decades – points to Washington’s growing isolation upon the global stage.