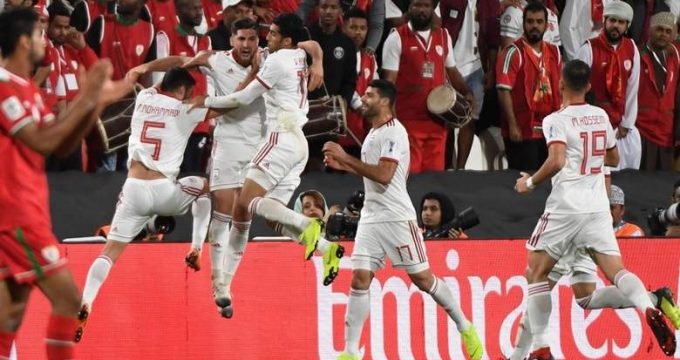 Khaleej Times – Alireza Jahanbakhsh and Ashkan Dejagah were on target as Iran beat Oman 2-0 to advance to the quarterfinal of the AFC Asian Cup 2019.

It would have been a different story had Oman, playing their first knock out game, converted a first-minute penalty kick. Omani striker Muhsen Al Ghassani was pinned inside the Iranian box by defender Majid Hosseini and referee awarded a spot kick but an experienced Ahmed Al Mahaijri failed to bypass keeper Alireza Beiranvand, who leapt to palm the shot away.

The penalty shocker and the great escape saw Iran, the three-time champion, hit back with vengeance. Iranians were tenacious and threatened through attackers Sardar Azmoun and Mehdi Taremi.

Iran kept probing and it led to a mistake by Oman. It was a long ball into the Omani box and defender Mohammed Al Musallami tried to back pass to his keeper but was outdone by the pace of Iranian winger Alireza Jahanbakhsh, who stole the ball and deposited into the centre of the goal.

There was no let from Iran and they soon doubled the tally. In 41 minutes, Omani defender Saad Al Mukhaini was found guilty of bringing down Taremi inside the box and skipper Ashkan Dejagah converted the resulting spot kick to make it 2-0 at half time. Iran continued their stronghold on the game through Taremi, Azmoun and Dejagah. Oman tried till the last minute but failed to change the fate at the Mohammed bin Zayed Stadium.

Iran will now meet China in the quarterfinals at the same venue on Thursday (8 pm).