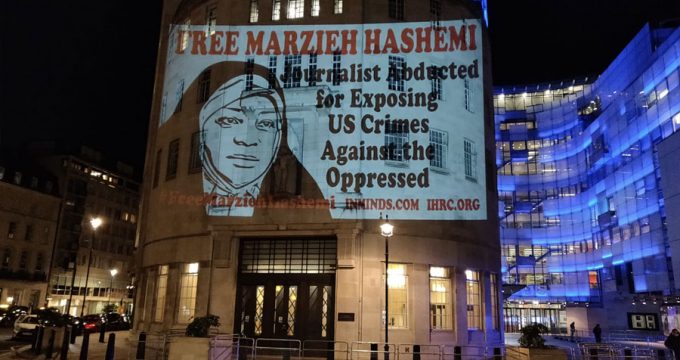 IRNA – The London-based Islamic Human Rights Commission (IHRC) has projected a picture on the BBC building wall in a move to protest against detaining Iran’s news anchorwoman in the US.

The large picture depicts an image of Marzieh Hashemi, Press TV’s Muslim news anchor and journalist and some phrases which condemn the US federal police’s misconduct with her.

‘Free Marzieh Hashemi,’ ‘Journalist abducted for exposing US crimes against the oppressed,’ ‘Journalist imprisoned by the US federal police without charge,’ read some of the picture projected on the BBC building wall.

Masoud Shajara Head of IHRC told reporters he had written a letter to the UN Working Group on Arbitrary Detention to protest against the situation of Hashemi.

He noted the US President Donald Trump did not approve of anything which runs counter to his lies and tweets.

The US-born Press TV anchorwoman arrived in St. Louis Lambert International Airport last Sunday to visit her cancer-stricken brother and other family members, but wound up being arrested by the FBI agents to be transferred to a detention center in Washington, DC.

Although no charges have been leveled against her, she was treated like criminals, she told her family.

Iran’s Muslim anchorwoman also said she was subjected to abusive and inappropriate behavior, with her hijab forcibly removed and being denied halal food (food permitted by the Islamic law).

Her family and friends announced in a statement on Wednesday that no ground has yet been provided for arresting her and that they were privy to the issue two days after the detention.

‘Marzieh Hashemi is now being kept at a general ward of the prison, wearing handcuffs and shackles. She has avoided eating pork and has only been eating biscuits,’ the statement read.

The statement went on to say Hashemi was denied hijab, left with only a t-shirt and forced to cover her hair by another.