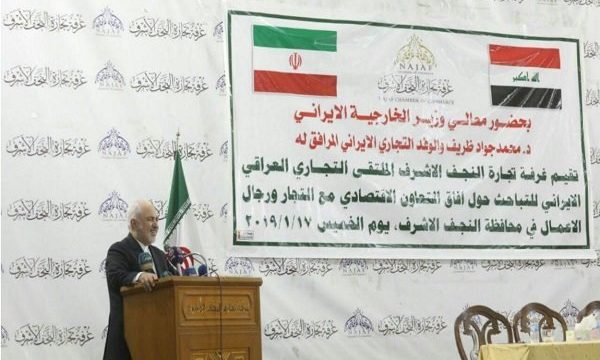 Heading a high-ranking delegation, including Iranian Ambassador to Iraq Iraj Masjedi , Zarif took part in the meeting, which was held between Iranian and Iraqi entrepreneurs and businesspersons.

Representatives of major Iranian firms, and industrialists, and top Iraqi businessmen convened to explore the avenues for boosting trade and economic ties between the two countries.

The top diplomat had attended a similar forum in the holy city of Karbala on Wednesday morning.

Zarif arrived in Iraq on Sunday holding a number of meetings with senior Iraqi officials in Baghdad, Sulaymanieh, Erbil, Karbala, and Najaf. He is scheduled to wrap up his 5-day stay in the Arab country later today.