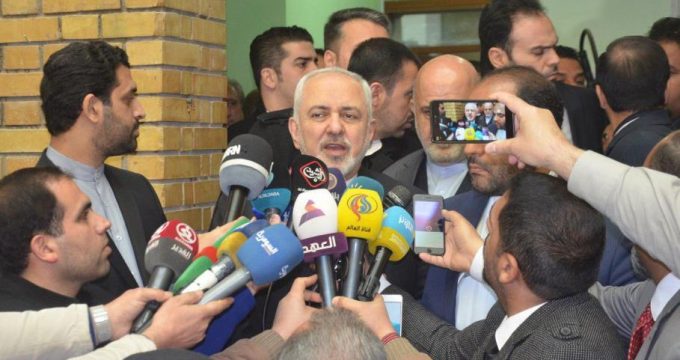 MNA – Iranian Foreign Minister Mohammad Javad Zarif said US Secretary of State Mike Pompeo does not have the right to interfere in Iran-Iraq issues.”

“Iran and Iraq were friends, long before the United States of America was created,” foreign minsiter Zarif said responding to a question regarding US Secretary of State Mike Pompeo’s remarks on Iran-Iraq relations, adding “he has no right to interfere in the issues of Iran and Iraq.”

Regarding his visit to Iraq, Zarif told reporters “the trip which took 5 days was my longest trip to this country; it was great and I held good meetings and talks with officials.”

“In all my meetings with Iraqi officials, we emphasized the very close and historical relationship between the people of Iran and Iraq and the governments of the two countries and the two nations have the long record in fighting against terrorists,” he added.

Iranian Foreign Minister Mohammad Javad Zarif at the head of a high-ranking economic and political delegation made official visits to some regional countries, including India and Iraq as well as Iraqi Kurdistan.