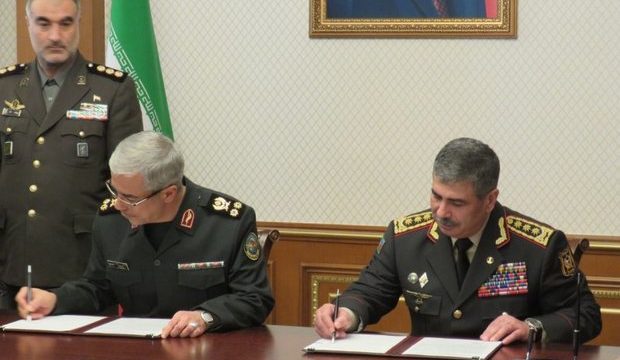 January 17, The Iran Project – Heading a high-ranking military delegation and at the official invitation of his Azeri counterpart, Chief of General Staff of Iranian Armed Forces Major General Mohammad Baqeri paid a two-day visit to Azerbaijan on Wednesday (Jan. 16) to confer on military and defense cooperation.

Following a meeting between the defense ministers of the two countries, a memorandum of understanding on military/defense cooperation was signed.

He said Iran reiterated its support for the territorial integrity of Azerbaijan and underlined the need for expanding cooperation in the fields of logistics and training as well as an exchange of military experiences.

The Azeri minister, for his part, expressed confidence that the visit would further enhance “bilateral military cooperation to the highest level.”

He further said Baqeri’s visit provided the opportunity to review the activities of Iran-Azerbaijan Joint Defense Commission, saying necessary recommendation has been made to enhance its performance.

During a meeting with the Azeri president, Baqeri noted the deep-rooted historical and cultural ties between Tehran and Baku, adding “the two countries’ ties are now at the highest level thanks to the will of their leaders to develop and consolidate long-term relations and cooperation.”

Maj. Gen. Baqeri highlighted the willingness and joint efforts of Tehran and Baku to establish peace, stability, and security in the region, saying “both countries have a strong desire to develop military and technical ties, as well as cooperation in providing security on shared borders.”

He also expressed Iran’s readiness to exchange experience with the Republic of Azerbaijan in fighting terrorism.

In a meeting with the Azeri parliament speaker, General Baqeri highlighted Iran’s determination to deepen political, economic, cultural and military relations with the Azerbaijan Republic.

Asadov, for his part, called Iran and the Azerbaijan Republic as two friendly states, saying that there exist good conditions for deepening ties based on historical, cultural and religious commonalities.

Trade exchanges between the two countries have increased to $400 million over the past nine months to December 21 from $257 million in 2017, he said.

In a joint press conference with Azerbaijani Prime Minister Novruz Mammadov, the Iranian official announced the development of defense and military relations between Iran and the Republic of Azerbaijan, adding “based on an agreement signed by all the Caspian coastal countries, including Azerbaijan, the two countries will hold joint naval drills in the Sea.”