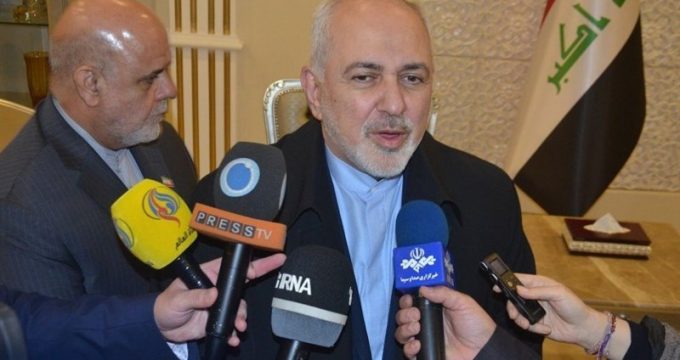 Tasnim – Iranian Foreign Minister Mohammad Javad Zarif expressed satisfaction with the results of his fruitful visit to Iraq, predicting a very bright future for the political and economic ties between Tehran and Baghdad.

Speaking to reporters in Baghdad at the conclusion of his trip to Iraq, Zarif said his longest ever trip to a foreign nation as the foreign minister was very good.

“We had very good meetings with the Iraqi officials and held perfect meetings with the local authorities, the private sector representatives, as well as a number of the civil society activists and tribal chiefs in all of the cities we visited,” Zarif noted.

Praising the “historical ties” between Iran and Iraq, the foreign minister said such bilateral bonds are “not fake” and Iranians do not need to travel to Iraq in a sneaky manner, unlike the US president.

“I believe that the future of relations between Iran and Iraq, both the political and economic ties, is very bright and will become better day by day by God’s grace,” he added.

Zarif also noted that the Iraqi president will soon pay a visit to Iran.

As regards US Secretary of State Mike Pompeo’s recent meddlesome comments about the relations between Tehran and Baghdad, Zarif said he has no right to interfere in Iran-Iraq affairs.

“Iran and Iraq have had relations before the formation of the US administration, and will maintain ties for a pretty long time,” the top Iranian diplomat concluded.

Heading a business and diplomatic delegation, Zarif arrived in Baghdad on Sunday and held meetings with senior Iraqi officials as well as Kurdish authorities in Erbil and Sulaymaniyah. He also visited the cities of Najaf and Karbala.