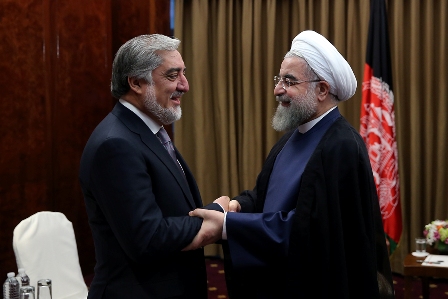 Alwaght – Iran and Afghanistan, neighbors with the same language, have always had a close political and cultural relationship. But recently some sides appear to seek to sow division between the two neighbors while they are experiencing a considerable growth of bilateral closeness.

While the top senior Iranian officials, including foreign minister, the national security council chief, and deputy foreign minister the visited the Central Asian nation to show full support to the central government and backed talks with the Taliban as a solution to the decades-long crisis, some internal groups in Afghanistan, mainly those with proximity to the Western sides and mainly the US, have brought accusations against the Islamic Republic of Iran.

The anti-Tehran allegations come while Iran and Afghanistan work towards further progress in their bilateral ties. Some analysts argue that the allegations against Iran serve Trump administration’s scheme to put a maximum pressure against the Iranian government. The charges surround the Iranian support for talks between Kabul and the Taliban militant organization. The allegations drew a reaction from the Afghan foreign ministry spokesman. Iran is under fire by a suspicious propaganda campaign for its advocacy of peace talks in the war-hit nation while now key regional players, including Pakistan, the UAE, and Qatar, and even the international actors, like the US and India, are for the idea of Kabul-Taliban negotiations.

Now, the US government envoy to Afghanistan Zalmy Khalil is busy talking to the Taliban representatives in the UAE and Qatar. The Indian army chief said last week that New Delhi considered direct contacts to the insurgent organization. With this in mind, taking stances against similar measures by Iran look quite unusual and are in line with the anti-Iranian postures of the US and Saudi Arabia, both the main architects of the militant organization in the 1980s, one nurturing it and the other supporting the group financially.

Recently, the Iranian Foreign Minister Mohammad Javad Zarif in an interview with an Indian TV channel said the Taliban should be allowed some weight in the future Afghanistan government but added that this weight should not give the group the lead in the country’s politics. Zarif, answering a question about the role of the militant group in the Afghan future, said that the Afghan people should be allowed to determine whom they want.

Having in mind that the Iranian diplomats see a key place for the people in the determination of the future, baselessly accusing Tehran of working against the Afghan interests only plays into the hands of an American-designed scenario, especially that the Iranian contacts to the other Afghan groups come with full knowledge of the Afghan government.

It should be noted that Iran has the legitimate right to be concerned about the future of peace and stability in Afghanistan, a country sharing deep cultural and lingual roots with Iran. Iran shares 1,000 kilometers of borders with Afghanistan, something giving Tehran every right to put emphasis on the Afghan security which is its own security.

A look back to the 1980 and 1990s makes it clear that the war and instability in Afghanistan meaningfully affected Iran. In the early 1980s when the Soviet Red Army invaded Afghanistan, over 3 million people fled into Iran. When the US invaded Afghanistan in 2001, Iran once again suffered the humanitarian consequences of the Afghanistan occupation. So, political stabilization of Afghanistan will positively reflect on the eastern Iranian borders. This is the main drive behind the Tehran advocacy to the advancement of peace in Afghanistan in a process covering all Afghan groups.

Iran is among the rare countries that fully accomplished its commitments to the Afghan government. Tehran has been one of the key investing sides in Afghanistan over the past few years. The investment covered infrastructural projects, including agriculture, bridge and road building, health, and energy. One example is the $4-billion Khaf-Herat railroad project that connects eastern Iran to western Afghanistan. The project is crucial to Afghanistan, a landlocked country. The heavy investment in Afghanistan highlights the need for sustainable peace and growth in the war-ravaged country and strong Iran-Afghanistan ties which are the priority in the Iranian policy of helping peace proceed.

Iran is working for peace in Afghanistan and, So far, has offered the largest-scale supports to strengthen the Kabul government. Furthermore, Iran hosts a considerably large number of Afghan refugees whose presence in the country boosts the cultural bonds between the two nations.

But, apparent enough, Iran’s role in Afghanistan, no matter how much constructive, is opposed to by the US, an occupying power with thousands of troops on the Afghan soil. As the recent developments display, the US Department of State goes to great lengths to block further closeness of the neighbors.

Washington is worried that once its forces quit Afghanistan, Kabul leaders, remembering the past aids, lean towards Tehran. Such a fear energizes pro-division efforts by the US that also can be tracked in the recent anti-Iranian remarks by some Afghan sides.