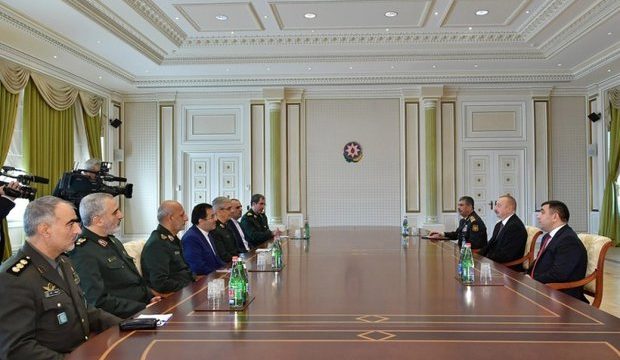 MNA – Chief of General Staff of Iranian Armed Forces Major General Mohammad Bagheri has met and held talks with President of the Republic of Azerbaijan in Baku on Wednesday.

Major General Bagheri, who is in Baku atop a high-ranking military delegation at the official invitation of Azerbaijan’s Minister of Defense Zakir Hasanov, met and held talks with President Ilham Aliyev in the Azeri capital on Wednesday.

During the meeting, Bagheri noted the deep-rooted historical and cultural ties between Tehran and Baku, adding “the two countries’ ties are now at the highest level thanks to the will of their leaders to develop and consolidate long-term relations and cooperation.”

Iran and the Republic of Azerbaijan cooperate in various economic, political, military, security and defense spheres, he added.

Maj. Gen. Bagheri highlighted the willingness and joint efforts of Tehran and Baku to establish peace, stability and security in the region, saying “both countries have a strong desire to develop military and technical ties, as well as cooperation in providing security on shared borders.”