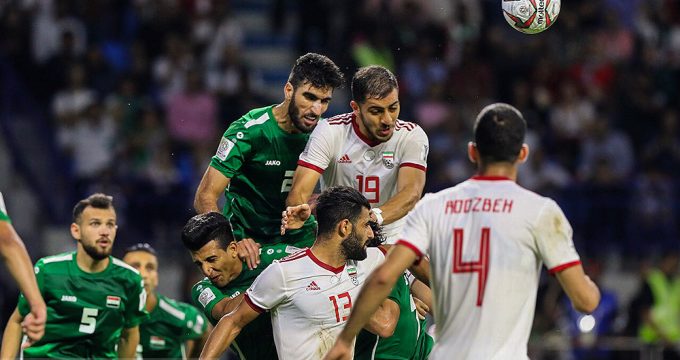 The National – Iraq and Iran played out a hard-fought goalless draw in Dubai on Wednesday night as both teams moved into the Asian Cup knockout stages..

The two teams, who had already qualified for the last 16, were contesting top spot in Group D, which eventually went to Iran following the stalemate at a busy and boisterous Al Maktoum Stadium. The Asian Football Confederation cited the official attendance at 15,038.

With the match finishing 0-0, Iran took the top spot in the pool on goal difference and can therefore in theory expect an easier opponent in next week’s last 16. Iraq, meanwhile, could face in the next round either Saudi Arabia or Qatar.

Although the clash did not provide a goal, both sides battled throughout, cheered on by a fervent crowd. The best chance of the opening 45 minutes was also the first. Twelve minutes in, an Iran free-kick was deflected out left to Vahid Amiri, who whipped a high cross across the Iraq goal.

Sardar Azmoun, Iran’s star striker with three goals thus far this tournament, had stolen in unmarked, but somehow directed his header down into the turf and over the crossbar. Six yards out, the Rubin Kazan forward really should have scored.

At the other end, Mohanad Ali found himself in a similar position, but stretching slightly too much, he could only glance his header wide. With five goals in nine matches under former UAE manager Srecko Katanec, the Iraq frontman threw his head in his hands.

Twice in the first-half, Iran appealed vigorously for penalties. Yet both would have been harsh on Iraq. On 27 minutes, Iran captain Omid Ebrahimi fell to the ground having felt Atalanta defender Ali Adnan at his back, but referee Ravshan Irmatov waved away appeals. The Uzbeki official did likewise not long before the break, when Azmoun shot at Safaa Hadi and claimed the ball had ricocheted off the Iraqi’s hand.

In between the two incidents, Iran’s Saman Ghoddos was fortunate not to see red. Chasing a loose ball, and with Hadi sliding to reach it, the Amiens midfielder stamped down on his rival’s leg. Tempers threatened to boil over as both sets of players converged on one another; Ghoddos escaped with a yellow card.

Three minutes from the break, Iraq escaped from conceding the opener. This time, Alireza Jahanbakhsh wasted a golden opportunity. Finding space around 12 yards out, the Brighton and Hove Albion striker blasted his half-volley over the Iraq goal when set to score. Jahanbakhsh will point to Ahmed Ibrahim’s last-gasp attempt to block as reason for the miss.

It took 20 minutes of the second-half for either side to coax an opportunity. Mohanad Ali collected a misplaced clearance on the edge of the Iran penalty area, swivelled and shot, but but his effort lacked very little venom and was gathered easily by goalkeeper Alireza Beiranvand. Mohanad Ali was substituted soon after.

On 77 minutes, Iraq thought they had finally broken the deadlock. The lively Humam Tariq cut inside from the right onto his favoured left foot and crossed for Alaa Abbas, who directed a header goalwards under close attention from his marker. With the ball poised to loop into the top corner, Beiranvand leapt to tip it to away for a corner. Abbas, introduced for Mohanad Ali, feel to his knees in frustration.

From there, Iran pushed for a way through, yet several free-kicks sent into the Iraq area failed to bring about any real attempts on goal.

And so the match concluded 0-0, meaning both sides finished the group unbeaten, with two wins from three matches. Iran, the highest-ranked team in the tournament at 29th in the Fifa standings, are seeking a record-equalling fourth Asian Cup, while Iraq have won once before, memorably in 2007.