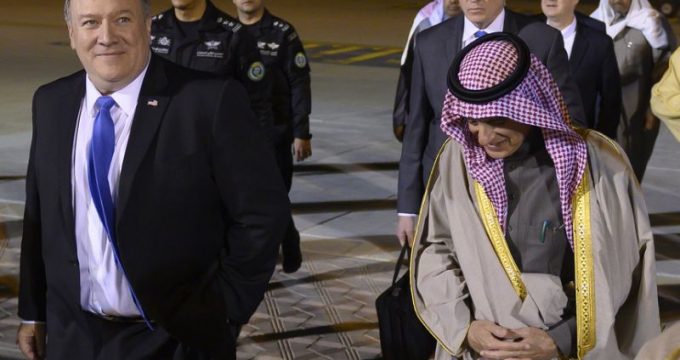 AP | Matthew Lee: U.S. Secretary of State Mike Pompeo held talks in Saudi Arabia Monday on a range of Mideast crises, topped by the conflicts in Syria and Yemen, threats from Iran and the Saudi response to the killing of Washington Post columnist Jamal Khashoggi last year.

Pompeo met with Saudi King Salman and Crown Prince Mohammed bin Salman on the latest stop of his Middle East tour that has so far been dominated by questions and concerns about the withdrawal of U.S. troops from Syria. The State Department said Monday that Pompeo would cancel his planned final stop in Kuwait on Tuesday due a death in his family. He will still travel to Oman later Monday.

In Riyadh, the Saudi-led fight against Iranian-backed rebels in Yemen, where the situation has been deemed the world’s worst humanitarian crisis, will be a major agenda item, as well as holding perpetrators accountable for Khashoggi’s slaying.

ompeo told the crown prince that his Middle East journey, which has taken him to Jordan, Iraq, Egypt, Bahrain and the United Arab Emirates, had been “good” so far.

“I want to talk to you about a couple of places we’ve been. We think we learned a lot along the way that will be important going forward,” he said.

The prince replied that the Saudis would “try to add more positivity, as much as we can.”

Speaking with senior Saudi officials on his arrival in Riyadh late Sunday, Pompeo stressed the importance of supporting a political solution to end Yemen’s civil war and “the need for continued regional efforts to stand against the Iranian regime’s activity and to advance peace, prosperity, and security,” the State Department said.

The relationship between Riyadh and Washington remains tense following Khashoggi’s brutal slaying and dismemberment at the consulate. Members of Prince Mohammed’s entourage have been implicated in the killing and U.S. lawmakers have demanded America pull back its support of the Saudi-led war in Yemen.

“We will continue to have a conversation with the crown prince and the Saudis about ensuring that the accountability is full and complete with respect to the unacceptable murder of Jamal Khashoggi,” Pompeo told reporters in Qatar on Sunday before heading to Riyadh. “We’ll continue to talk about that and make sure we have all the facts so that they are held accountable certainly by the Saudis, but by the United States as well, where appropriate.”

The ongoing dispute between Qatar and four of America’s other close Arab partners will also feature in Pompeo’s talks as it continues to be a major hindrance in a U.S.-led effort to unite the Gulf Arab states, Egypt and Jordan in a military alliance to counter Iran.

Qatar has long denied funding extremists, but Doha shares a massive offshore natural gas field with Tehran that gives its citizens the highest per-capita income in the world. It restored diplomatic relations with Iran after the crisis erupted, marking a setback for Saudi Arabia, which views the Shia power Iran as its main regional rival.

A similar dispute involving Qatar erupted in 2014. But this time positions have hardened against Qatar, whose support for Islamist opposition groups has angered the Arab nations now boycotting it.

However, comments in Doha by Pompeo and Qatari Foreign Minister Sheikh Mohammed bin Abdulrahman Al Thani gave no sense of any movement in the ongoing diplomatic crisis with Doha.

Later, speaking to a U.S. Embassy staff member in Qatar who said her job was moving to the UAE due to the boycott’s effects, Pompeo was even more frank.

“It’s on everyone’s mind and not at all clear that the rift is any closer to being resolved today than it was yesterday — and I regret that,” Pompeo said.