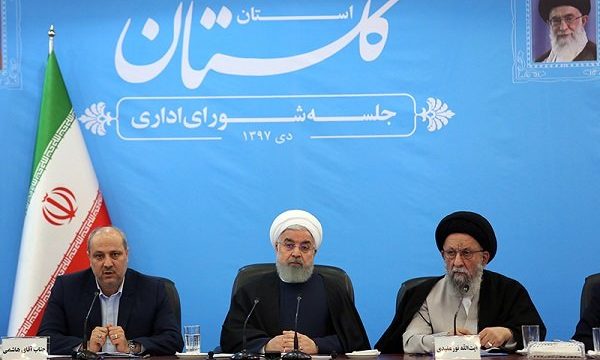 MNA – Iranian President Hassan Rouhani said Tuesday that the US Secretary of State Mike Pompeo’s anti-Iran tour of Middle East is doomed to failure, even if it lasts for 10 weeks.

He made the remarks at the Administrative Council of Golestan province, adding, “the country is not experiencing normal conditions however, we do not fear sanctions, we do not retreat and abandon our aims.”

Like the Imposed War, this economic war has been imposed on us but we will stand, Rouhani stressed.

“We are proud that like the 8-year war [imposed by Iraq], we weren’t the party who violated out commitments,” he noted, adding, “many provoked us to violate our obligations, but we did not start the economic war.”

He also said, “Trump is seeking to separate people from the establishment so that we abandon our independence and be isolated, but he didn’t succeed and will not be successful in the future.”

“The United States faced resistance from 14 other members even during its presidency of the UN Security Council,” he added.

“Those who bought hundreds of billions of dollars of weapons in the region are admitting today that they did not achieve their goals in Syria, Iraq and Yemen,” said Rouhani.

“What US is seeking by bringing up negotiations is [to force us] to abandon nuclear technology,” Iranian President highlighted, adding, “today, we are in the best condition and we are producing 20% [reactor] fuel and despite the sanctions in recent months, we bought ten container ships.”

President emphasized that the United States intends to build a wall around Iran, adding, “It is not possible for America to do this and Iran will never be isolated, and now, globally, there are only a few countries are supporting their move regarding the nuclear deal and sanctions.”

“The other goal of the United States is to decrease the role of Iran in the region so that we cannot be among the leading and influential countries in this region.”

“They have already tried it in several countries, including Yemen, but failed and are seeking ways to pull themselves out of Yemen, and today it has become clear that US military experts were in Yemen,” he added.

“Over the past few years, some regional countries have bought more than $100 billion worth of weapons, mostly from the United States, but despite these weapons, they state that they have failed in Yemen and that Yemen had no military solution.”

“Regarding Syria, they also thought that they would have absolute success and they had the same thoughts about Iraq and other countries in the region, but what happened in these countries was completely different from what they thought.”

“The United States wants Iran to step aside in the region so that it can dominate the region; this is impossible to do. The US Secretary of State’s anti-Iran tour of Middle East is doomed to failure, even if it lasts for 10 weeks.”

Elsewhere, Rouhani said that Incheh-Borun corridor connects the East to Europe and needs to be completed and electrified, adding that the necessary groundwork for electrification of Gorgan rail link to Mashhad or Garmsar has been conducted by the government.

Appreciating the warm welcoming of the people of Golestan Province, president said that the unity and empathy of the officials and the people of the province are very valuable.