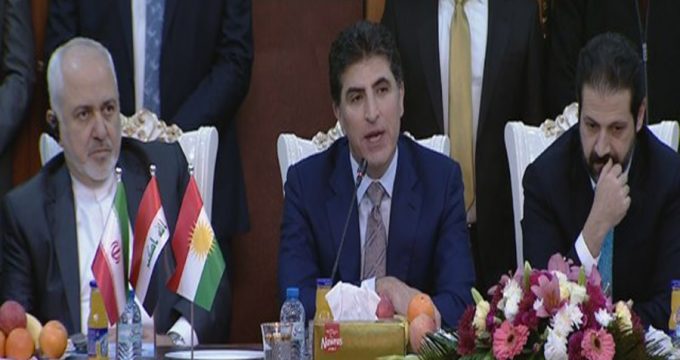 The top Iranian diplomat arrived in Erbil on Tuesday from Baghdad as part of his 4-day visit to Iraq, which he started on Sunday.

“Together, we will progress and succeed; we need the region, and the region needs us,” Zarif said in a speech to an economic conference held in Erbil.

“The security of the region is important to Iran, and no one can affect the relationship between the two sides,” he said.

Regarding trade and economic relations between Tehran and the Kurdish region, Zarif said Iran will work to overcome obstacles facing the region’s traders.

For his part, Nechirvan Barzani, the head of the Kurdish Regional Government (KRG), said the Kurdish region and Iran have “bonds of brotherhood and friendship”.

“Iran has extended a hand of cooperation and friendship to the region; we will not forget these positions by Iran,” he said.

“We are working to further strengthen relations with Iran,”Barzani said.

Close ties have been existed between Iraq and Iran since the toppling of the former Iraqi President Saddam Hussein in 2003 by U.S.-led coalition forces.

Zarif’s visit to Iraq is particularly focused on the economic sides in an effort by Tehran to boost trade and investment between the two countries at a time Iran is suffering from sanctions imposed by the U.S.

Trade between Iraq and Iran amounted to $12 billion.

Officials say that, despite the U.S. sanctions, the two sides would work hard to increase the volume of trade to $20 billion.