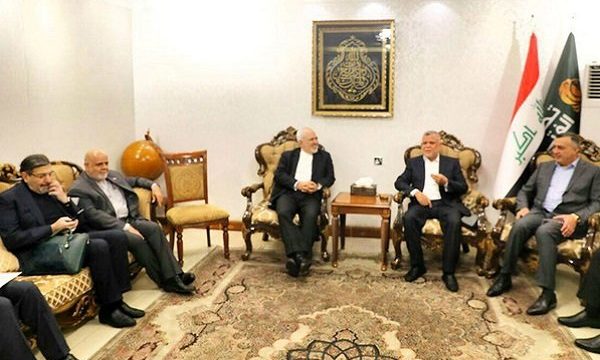 According to the official webiste of Iranian Foreign Ministry, in the meeting, Ameri pointed to the efforts of the alliance in the recent elections to pass tribalism, saying that “the faction includes members from different religions and ethnicities, and the people’s attachment to the coalition showed that people want to defeat tribalism.”

Referring to the recent moves in the Iraqi capital, Ameri said the meetings and moves showed Iraq has reached great stability.

“Iraq is an important country of the region and it would be to the region’s detriment if the country cannot play its regional role,” he said.

In turn, FM Zarif expressed satisfaction over meeting the Construction Alliance, saying the alliance’s movement is a clear example of the victory of resistance and democracy in Iraq.

Zarif said the active role of religious authorities and jihadi leaders and the Iraqi people led to the victory over terrorism, saying that “this victory turned Baghdad into an important capital of the region for meetings of various political and economic delegations, and the regional views of the president and prime minister [of Iraq] are supported by us.”

“Those who spend seven trillion dollars in the region did not spend it for the security and stability of the region, but for their unilateral interests,” he said.

Jamal al-Karboli, a leader of the Construction Alliance, also hailed Iran’s constructive role in assisting the Iraqi people to fight ISIS, rejecting the policy of placing sanctions against nations.

Members of the Construction Alliance asked the Iranian foreign minister to stand next to Iraqi people and government in the reconstruction phase in the same way the country stood by the Iraqi nation in the fight against ISIS.

Heading an economic-political delegation, the Iranian top diplomat arrived in Baghdad yesterday afternoon on a 5-day visit to hold meetings with high-ranking Iraqi as well as Kurdish officials in Erbil and attend three trade meetings between the economic activists from the two countries’ private sectors in the Iraqi cities of Baghdad, Karbala and Sulaymaniyah.

Zarif has so far met with his Iraqi counterpart Muhammad Ali al-Hakim, Iraqi Prime Minister Adil Abdul-Mahdi, as well as President Barham Salih. He is also scheduled to visit the holy sites in Karbala and Najaf on the 5-day visit.

The Zairf-headed Iranian delegation’s visit comes in less than a week after the visit of Iranian Oil Minister Bijan Zanganeh to the neigbouring country.