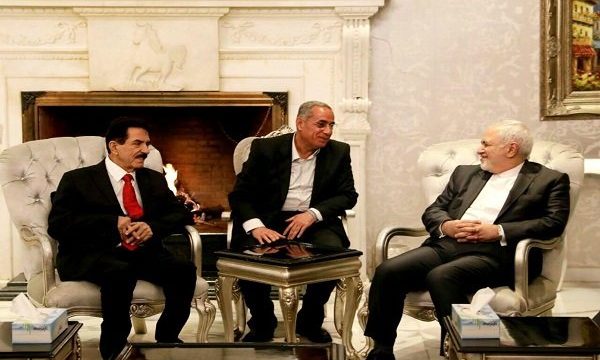 Zarif traveled to Kurdistan Region from Baghdad, as part of a 4-day visit to the neighboring country of Iraq and Kurdistan region. After holding talks with high-ranking Kurdish officials and attending a trade meeting in Erbil, Zarif arrived in Sulaimaniyah on Tuesday afternoon.

In the meeting with the PUK Secretary General Kosrat Rasul, which took place at the end of the one-day visit to the region, Zarif praised the role that late Iraqi president Talabani played in bringing all Iraqis together.

Zarif and Kosrat Rasul also agreed to increase economic and trade cooperation between Iraqi Kurdistan, particulararly Sulaimaniyah province and the Islamic Republic of Iran. The two officials expressed their support for closer copperation between the economic agents from the private sectors and the entrepreneurs of both sides.

Regional issues, especially ongoing developments in Syria, were also discussed with an emphasis on political solutions.