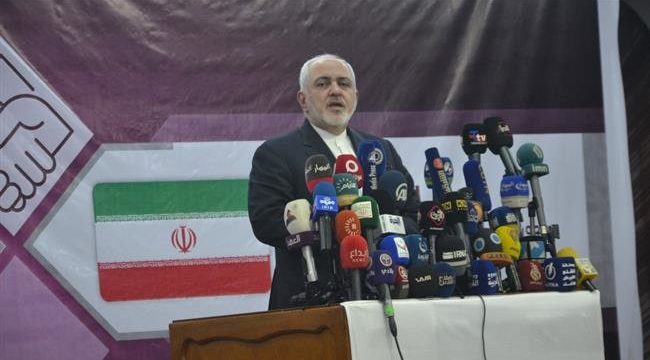 Zarif made the remarks while addressing a gathering of representatives from hundreds of Iranian and Iraqi companies in the Iraqi capital city of Baghdad on Monday.

Zarif noted that in a strong region, all countries can trust one another and make a better future for themselves, adding, “In this case, bilateral and multilateral relations among countries in this region would be stronger than their relations with other countries.”

The Iranian foreign minister stated that in order to achieve this goal, the Islamic Republic of Iran welcomes the expansion of cooperation with all regional countries and knows no limit for the development of relations and cooperation with Iraq.

“The blood of Iranian and Iraqi youths has been spilled in the fight against terrorism and profound ties between the two nations are such that no power is able to draw a wedge between them,” Zarif said.

The trade meeting between the economic agents of the two countries’ private sectors kicked off on Monday in the presence of the Iranian foreign minister and his accompanying delegation, Iran’s Ambassador to Baghdad Iraj Masjedi and six Iraqi ministers.

The meeting was held with the purpose of discussing opportunities for investment in Iraq, the participation of Iran’s private sector in the reconstruction of Iraq after the defeat of Daesh terrorists and enhancement of trade cooperation.

In a meeting with a number of Iraqi lawmakers earlier in the day, Zarif said Baghdad has turned into a key venue in the region for meetings among various political and economic delegations.

He expressed the Islamic Republic’s support for Iraq’s stance on regional developments.

“Those who spent seven trillion dollars in the region did not spend it for regional security and stability, but did that to meet their own interests,” the Iranian foreign minister said.

Heading a high-ranking politico-economic delegation, Zarif arrived in Baghdad on Sunday on a four-day visit.

Speaking to reporters upon his arrival in Baghdad, Zarif commended Iraq’s positive stance on the promotion of ties with Iran, saying the two countries have managed to foil US bids to sabotage mutual relations.

The visit comes a few days after the Iranian foreign minister traveled to India, where he exchanged views with the country’s officials on financial and banking cooperation, energy and transit.