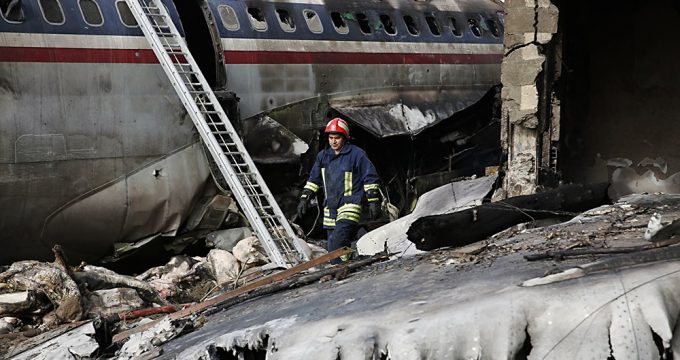 IRNA – Chief Commander of Iran’s Army Seyyed Abdul Rahim Mousavi and commander of the Air Force Aziz Nasirzadeh in separate messages expressed condolence on the crash of Boeing 707 aircraft and the martyrdom of a group of Army Air Force personnel.

Major General Mousavi on Monday described the lack of air force personnel as an irreparable loss.

The plane that crashed in an Iranian airport Monday morning was carrying meat from Bishkek, Kyrgyzstan, said the Public Relations Office of the Iranian Army in a statement.

The plane which was a Boeing cargo 707 made an emergency landing in Fath Airport, in the province of Alborz west of capital, Tehran. It was on the runway when it hit a wall and caught fire.

An official of Iran Civil Aviation Organization (CAO) said on condition of anonymity that the Boeing-707 mistakenly landed at Fath Airport in Karaj while the pilot could not control the plane on the runway.

Bodies of 15 passengers who were killed in a plane crash in Safadasht, Karaj province, in west of capital Monday morning have been transferred to the province’s Forensic Medicine Center, Director of the Crisis Management Department of Iran’s Forensic Medicine Organization Mehrdad Alibakhshi announced.

Alibakhshi said that out of 16 passengers, only one survived in the crash. Ten of the bodies transferred to Forensic Medicine Organization have already been identified while work is going on to identify the rest.

He noted that from among the ten dead bodies identified, one belongs to a woman.