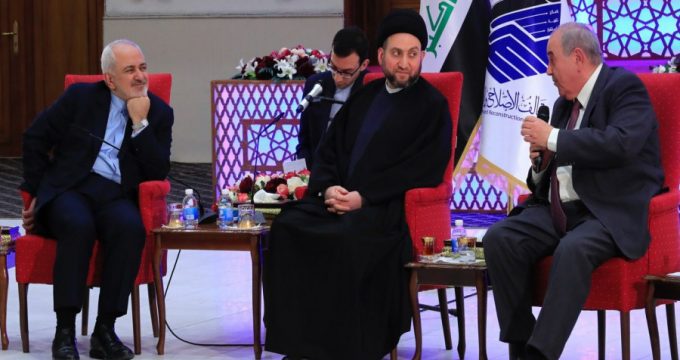 Allawi made the remarks on Sunday evening in a meeting held in Baghdad where members of the visiting Iranian delegation led by Zarif and the reform and reconstruction body of Iraq were present.

Zarif at the head of a high-ranking eco-political delegation arrived in the Iraqi capital on Sunday for a four-day visit.

As Allawi said in the meeting, all regional countries can work together to pass the history of tension in the region.

Referring to diplomatic efforts made by the Islamic Republic of Iran in the international arenas and Zarif’s important role in those efforts, Allawi said that the Iranian foreign minister now has the mission of carrying message of confidence to the region.

Allawi, the prominent Iraqi figure, further called for taking a new initiative for establishment of peace and friendship instead of tension in the region.

Iraq can well support this initiative, the Iraqi politician said.

He also referred to his meetings with the Arab, American and European officials at which he stressed the importance of moving towards removal of tensions.

Constructive talks should replace pressures and sanctions, he stressed.

On the issue of terrorism, he said all should cooperate to fight terrorists whose third generation is on the eve of emergence.

Crises will seriously hurt the region and prepare the ground for foreign interference, Allawi said calling on Zarif to play an effective role in dealing with the issue.

Later, Zarif is to meet with the Iraqi President Barham Salih.

He is also scheduled to attend Iran-Iraq joint economic commission meeting and travel to the city of Sulaymaniyah to negotiate with officials of the Iraqi Kurdistan region.