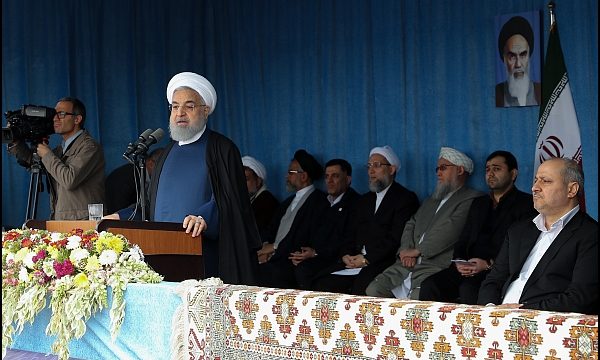 Iran to leave behind US sanctions with endurance

IRNA – Iranian President Hassan Rouhani pointed to unilateral US sanctions against Islamic Republic specified that Iranian nation would succeed in leaving the sanctions behind.

Addressing a gathering of people of Golestan province, President pointed to the US sanctions on bank, oil and shipping sectors, and said, ‘It’s hard, but we will succeed against the sanctions and we have to be united during hard days.

The head of executive branch of Iran’s government highlighted that the government was fully capable of serving the people and today was the test for everyone and the bonds should be strengthened with endurance.

Emphasizing that the role of the people in decision-making was vital for the people, the high-ranking official commented, ‘After the revolution in all elections, the people are the main decision-makers and they choose who to take the responsibility.”

‘We know that at this critical juncture our young people should take a job and fortunately Golestan’s statistics this year are desirable and one percent of the province’s unemployment statistics decreased.

The president said that one of the important areas that could lead to development in Golestan was to take advantage of the tourist attractions, adding that conditions should be provided to increase the time spent by tourists in the province, so that the province’s jobs will also be increased.

Accompanied by a number of his cabinet members, President Rouhani arrived in Golestan province this morning. During his two-day stay in the province, he will review the process of development in the province and the get familiar with problems that the provincial people are facing.

He will also hold meetings with the Sunni Ulema and provincial clerics and inaugurate a number of development projects.