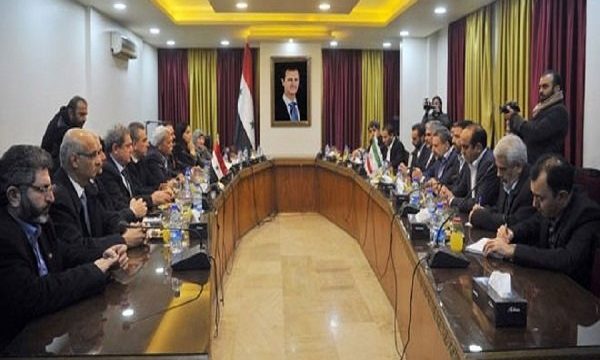 MNA – Heshmatollah Falahatpisheh said that Iran is ready to transfer state of the art technologies to Syria to rebuild the country.

Chairman of the National Security and Foreign Policy Commission of Iranian Parliament made the remarks Sunday at a meeting with his Syrian counterpart Faisal al-Khouri in Damascus.

Officials underlined the necessity of bolstering existing fraternal relations and expanding prospects of cooperation at all levels, especially parliamentary ones.

Falahatpisheh said the visit aims to consolidate relations between the two friendly countries in various aspects, stressing readiness of the delegation members to work to speed up ratification of the agreements signed between the two countries and contribute to the implementation of all proposed projects, SANA reported.

He pointed out the importance of the relations binding the two brotherly countries in light of the highly-sensitive conditions in the region and hoped that the victory achieved in Syria on terrorism will be followed by victories in the economic fields.

Faisal al-Khouri, the head of the National Security Committee at the People’s Assembly, stressed the depth of the historical ties binding Syria and Iran.

He expressed confidence that the visit of the Iranian delegation will achieve its objectives in deepening the relationship between the two countries’ parliaments.