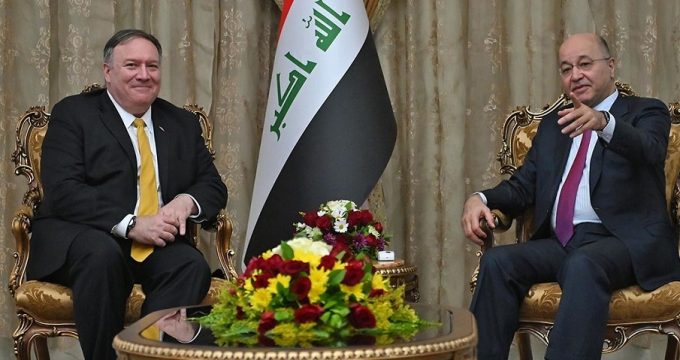 Did Pompeo achieve his anti-Iran goals during Iraq visit?

Alwaght – The US Secretary of State tour to the Arab countries which started last Monday has attracted attention of the media and the political experts. Since the beginning of the trip, the US top diplomat made clear why he was traveling to the West Asia region, saying he seeks confront Iran and increase the pressures on Tehran. According to the timetable published by the US Department of State, Pompano will visit eight Arab countries, including Jordan, Bahrain, Egypt, Qatar, the UAE, Saudi Arabia, Kuwait, and Oman.

After Jordan visit, the Secretary of State arrived in Baghdad in surprise. Pompeo arrived in Iraq on board a military aircraft and met the top Iraqi officials, including President Barham Salih, Prime Minister Adel Abdul Mahdi, Foreign Minister Mohamed Ali Alhakim, and parliament speaker Mohamed al-Halbousi. He then flew to Erbil, the capital of the Kurdish autonomous region to meet the leaders there. Pompeo talked to Masoud Barzani, the head of ruling Kurdistan Democratic Party, Nechirvan Barzani, the PM of the Kurdish Regional Government, and Masrour Barzani, Masoud’s oldest son and the government’s security advisor.

As a statement by the Department of State concluded, during Iraq visit to Iraq, two key issues became the center of focus in Pompeo’s discussions with the Iraqi officials. On the one hand, he discussed the aspects of the US exit from Syria, Iraq’s neighbor, and gave the assurances about the consequences. On the other hand, he discussed implementation of Iran sanctions with the Iraqi government and also Kurdish officials.

The question now is that has Pompeo managed to achieve his trip goals in Iraq? How have the Iraqi officials assessed the visit? To find an answer to this questions, we need to bring in the spotlight the reactions of the Iraqi members of parliament to Pompeo visit that comes three weeks after the Trump’s secret visit to Iraq and meeting with his troops in Ein Al-Assad military base in Al Anbar province a week before the New Year.

Big defeat to Pompeo and the US diplomatic apparatus in Iraq

The Secretary of State’s visit to Baghdad to persuade Iraq to join the implementers of the anti-Iranian embargo is seen as a sequel to the domino-style Washington’s anti-Iranian plans failure. Over the past few months, the three Iraqi leaders, and mainly the PM, highlighted the Baghdad decision not to side with Washington in the implementation of the ban against Tehran which comes after Donald Trump withdrew from the 2015 nuclear deal signed between Tehran and the world powers. The Iraqi officials have repeatedly made it clear that they will adopt a policy similar to Russia, the EU, and China— all against the re-imposition of the ban— in dealing with the reinstated Iran sanctions. After Pompeo visit, the Iraq officials’ approach towards Iran seems to remain intact, which means the Pompeo demands of Iraq to join the anti-Iranian efforts have gone nowhere.

But Iraq’s opposition to the anti-Tehran sanctions is not everything. The Iraqi politics are now highly anti-Americana with a tendency to end the partnership with Washington. Over the past month, the Iraqi parliamentarians have struggled to raise a bill at the parliament calling on the foreign forces, mainly the Americans, to pull out of the country. According to the latest news, the draft bill of the foreign forces exit has been delivered to the parliament’s Security and Defense Commission.

Modher Khaza’al, a member of parliament from Al-Islah (Reform) Coalition, has predicted that the draft law will be discussed by the parliament on Thursday. The reality is that a majority of the Iraqi parliament commissions are opposed to the US military presence in Iraq. For them, the undiplomatic measures of Americans are a violation of the country’s sovereignty and a disrespect to Baghdad.

The Trump secret visit to Ein Al-Assad military base and Pompano’s travel with a military plane are proofs of the American undiplomatic behavior towards Iraq, strongly condemned by the Iraqi lawmakers. Karim al-Mohammadawi, a lawmaker, argued that Pompeo arrival on board a military plane is a warning to the government of Adel Abdul Mahdi to force him to concede to the pressures to help Washington implement Iran sanctions.

All in all, the dominant media and political atmosphere in Iraq indicate that Pompeo’s schemes against Iran will meet their failure in Iraq station. The Iraqi people and government are more than any other time since 2003 united against the US intervention and occupation. This makes the Secretary of State’s visit to Baghdad a total failure as he fails to realize the goals he is aspiring towards.

Mike Pompeo, Pompeo visit to Iraq, US plots against Iran January 14, 2019
Is tourism able to replace oil as main source of revenues for Iran?
Iran energy minister: World water demand will rise by 20% by 2050