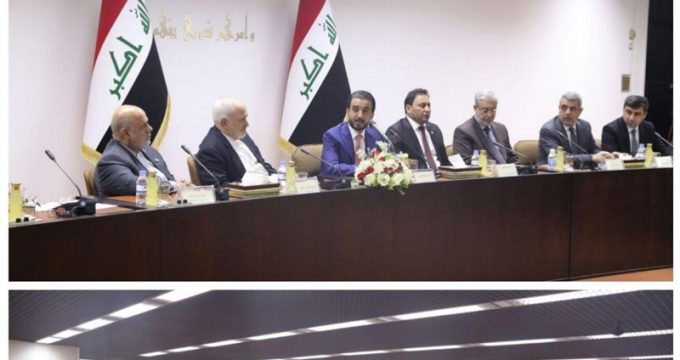 Speaking at a meeting with Iraqi Parliament Speaker Mohammed Al-Halbousi in Baghdad on Monday, attended by the chairmen of the Iraqi parliamentary factions, Zarif hailed the relations between the two countries, the parliamentary ties in particular.

The fact that seven million Iranians and Iraqis visit each other’s country each year is an outstanding sign of “the proximity of the two great nations,” Zarif said.

Every year, a large number of Iranians visit Iraq for pilgrimage. Iranian pilgrims travel to Karbala, Najaf and Baghdad to pay homage to Shia Imams buried in Iraq.

Iraqis visit the Iranian cities of Mashhad and Qom for pilgrimage.

The Iraqi parliament speaker, for his part, referred to the two countries’ common interests and praised Iran’s role in helping the Iraqi people defeat the Daesh (ISIS or ISIL) terror group.

However, a combination of concentrated attacks by the Iraqi military and the volunteer forces, who rushed to take arms after top Iraqi cleric Ayatollah Ali al-Sistani issued a fatwa calling for fight against the militants, blunted the edge of Daesh offensive.

In November 2017, the self-proclaimed caliphate of Daesh collapsed after Syrian and Iraqi armed forces and their allies managed to recapture the terror group’s last strongholds in the two Arab countries.