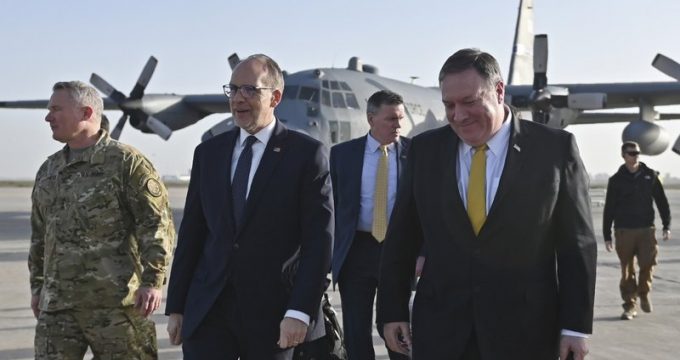 Pompeo makes unannounced visit to Iraq, makes no statements to the media

Press TV – US Secretary of State Mike Pompeo has made an unannounced visit to Iraq, involving meetings with high-ranking officials and no statement to media.

The American top diplomat landed in the capital Baghdad on Wednesday amid conflicting statements from the White House over troop withdrawal from Syria.

During his Middle East tour, the American hawk has been keeping up with his campaign of anti-Iran threats.

Last month, US Energy Secretary Rick Perry led a trade delegation to Baghdad to urge the Iraqi government to sever its energy ties with Iran and turn to Washington.

The former CIA chief’s visit is the third high-profile one by an American official to Iraq in the last month. He was expected to visit the Egyptian capital Cairo later in the day.

Meanwhile, efforts are underway in US Congress that could possibly result in hearings on Trump’s Syria policy.

“It may be one of those issues that would be appropriate to have a hearing on to see exactly what the administration intends to do and when,” Texas Republican Representative Mac Thornberry told reporters in Washington. “I think currently there are a fair number of folks here and around the world trying to figure out what we’re going to do and when. And I don’t have any good answers.”

A withdrawal framework for Operation Inherent Resolve (OIR) has been approved and is currently being executed by US forces, said Pentagon spokesman Commander Sean Robertson in a statement on Tuesday, failing to offer any timetable for the allegedly finalized plan.

Operation Inherent Resolve is the name of a US military campaign launched in August 2014 after the Daesh terrorist Takfiri group overran large swaths of Syria and Iraq.

The US has ever since maintained military presence in Syria without any authorization from the Damascus government or a UN mandate.