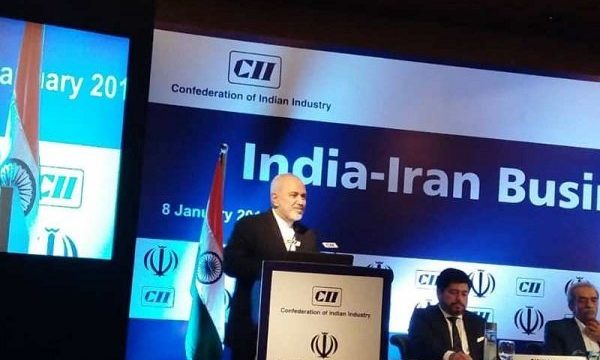 MNA – Foreign Minister Mohammad Javad Zarif said that Iran is the most reliable energy provider for India and will not allow any consideration to impede the relationship between the two countries.

“No economic power can tell us you cannot have relationship with India. This can give you confidence on the partner you are choosing,” Hindu BusinessLine quoted him as saying at an India-Iran business forum in New Delhi on Tuesday.

Touching upon US President Donald Trump’s hostile policies towards Iran, Zarif highlighted that the challenge facing bilateral relationships came from one single country, and more specifically one individual. The United States is asking other countries to violate a UN Security Council resolution, he regretted.

“We provide a third of urea fertilizer to India. Today Indian farmers are paying 38 percent more because of the arbitrary decision by an individual. Is this the future we want?” he asked, noting that the ‘arbitrary’ decision of a single country was already affecting economic interests.

The Iranian Foreign Minister maintained that the Islamic Republic has continued its development during the past 40 years despite sanctions and this progress will not be stopped.

Heading a high-ranking politico-economic delegation, Zarif embarked on a three-day visit to India on Monday. He is scheduled to hold meetings with Indian officials, participate in a joint business forum attended by the businessmen of the two countries, and deliver a speech at the annual Raisina Dialogue conference in New Delhi.