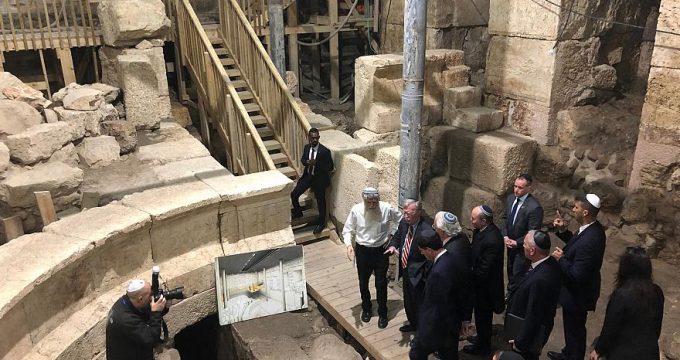 Euronews | Carol E. Lee: National security adviser John Bolton on Sunday toured the tunnels beneath the Western Wall in Jerusalem’s Old City, drawing criticism from Palestinian leadership as the U.S. announced another delay in the release of a much-anticipated Israeli-Palestinian peace plan.

The tour was an unusual move for a top U.S. official, as American dignitaries visiting the Western Wall typically don’t venture into the ancient tunnels, so as not to appear to take sides in the dispute over eastern Jerusalem between the Israelis and Palestinians.

Bolton also had lunch there beneath the Old City’s Muslim Quarter with Israeli officials. He wrote in the guest book that Israel’s excavation of the tunnels “is a great accomplishment.”

“Best wishes for all your efforts!” Bolton wrote.

Israel captured the city’s eastern half, home to holy sites for Jews, Christians and Muslims, in the 1967 Mideast war and annexed it. Palestinians seek east Jerusalem as capital of a future state.

“This behavior will not change the fact that East Jerusalem is occupied territory and the capital of the state of Palestine,” Erakat wrote on Twitter.

Garrett Marquis, a spokesman for the National Security Council, said Bolton “enjoyed a tour of historical Jerusalem provided by his hosts.”

The criticism from Palestinian leadership comes as the U.S. Ambassador to Israel, David Friedman, says the Trump administration plans to release its Israeli-Palestinian peace plan “within the next several months.”

“We want to release it a way that gives it the best chance of getting a good reception,” Friedman told reporters traveling with Bolton in Israel.

He said the Israeli elections in April “are a factor, but not the only factor” influencing the timing of the proposal’s release. The elections decide the fate of Israeli Prime Minister Benjamin Netanyahu, a close ally of the Trump White House.

“The challenge to a peace plan is making the case for a much more sober assessment of the realities in this region,” Friedman said.

Soon after he came to office, Trump promised to help resolve the conflict by unveiling the “deal of the century.” The president tasked son-in-law and top adviser, Jared Kushner, and Middle East envoy Jason Greenblatt with crafting the plan, which U.S. officials have hinted was imminent several times.

But already languishing efforts on a peace deal hit a series of roadblocks when the administration announced it was moving the U.S. embassy from Tel Aviv to Jerusalem, slashed aid to the Palestinians andclosed Palestinian offices in Washington. Direct talks with Palestinian leaders have yet to resume.

While Trump maintains that Israel would have to make concessions too in any negotiations, and that there will be an eventual payoff for Palestinians, it is unclear how the U.S. intends to get an agreement without Palestinian participation.