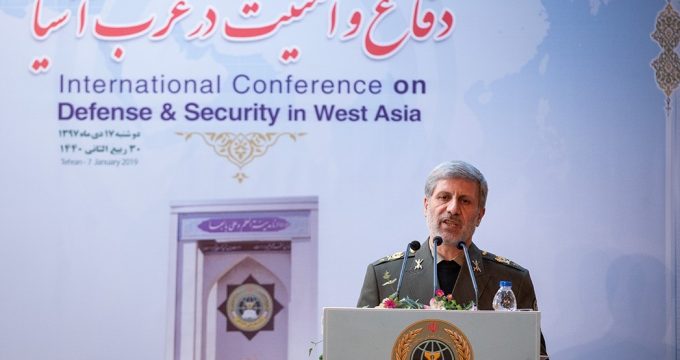 US, Israeli threats against Iran not to go unanswered: Defense Minister

Tasnim – Iranian Defense Minister Brigadier General Amir Hatami referred to the continued hostilities of the US and Israel toward the Iranian nation and said Iran will not remain silent on their threats against the Islamic Republic.

Addressing a gathering on “defense and security in West Asia” in Tehran on Monday, Brigadier General Hatami pointed to the US withdrawal from the 2015 nuclear deal and said the move proved that the Americans use any means to undermine the independence of countries.

He further deplored US-Israeli threats against Iran and said it does not make sense to keep silent on the threats posed by the Tel Aviv regime and their supporters and those who attack Iran’s cyber infrastructure.

“Our answer to them is that today is not the right time to test our will” the defense minister warned.

The remarks came as tensions between Iran and the US have escalated since US President Donald Trump walked away from the 2015 nuclear deal between Iran and world powers in May and re-imposed sanctions on the Islamic Republic.

Trump on August 6 signed an executive order re-imposing many sanctions on Iran, three months after pulling out of the Iran nuclear deal known as the Joint Comprehensive Plan of Action (JCPOA).

The second batch of US sanctions against the Islamic Republic took effect on November 4.