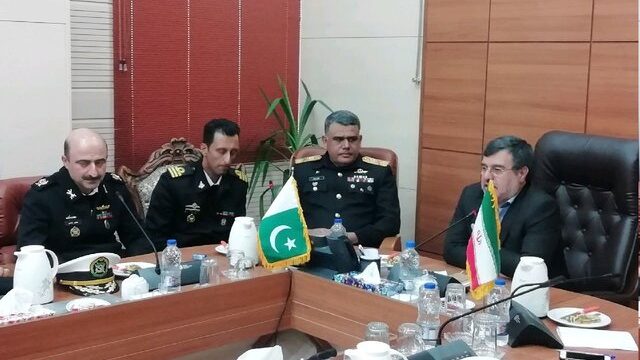 January 7, The Iran Project – In order to improve military relations and good neighborliness, on a friendly four-day visit, Pakistan’s Peace and Friendship fleet berthed in the southern Iranian port city of Bandar Abbas and its commander along with his accompanying crew met with local officials including the governor of Hormozgan and Leader’s representative in the province.

Addressing the welcoming ceremony of Pakistani Peace and Friendship, Commander of the 1st zone of Navy of the Islamic Republic of Iran’s Army Rear Admiral Mojtaba Mohammadi said, , “The purpose of this fleet presence in Iran is to develop military relations and strengthen good cooperation between two neighbors, friends, brothers and Muslims countries of Iran and Pakistan.”

He added that during the visit, in addition to the mutual visits, cultural and educational programs between the navy of the two countries, visiting students from Bandar Abbas city, the facilities of the 1st zone of the Navy and visiting Qeshm Island have been anticipated.

Admiral Mohammadi further noted that “Regarding maintaining relations, the navy of the Army of the Islamic Republic of Iran, by sending training, support and martial fleet has visited different ports of Pakistan.”

Speaking at a meeting with members of the navy with the governor of Hormozgan, Pakistan’s Peace and Friendship fleet Commander Admiral Mohammad Salem pointed to a close relationship between his country and the Islamic Republic of Iran and said his country would be along with the Iranian brothers in securing the Indian Ocean.

The Pakistani navy official said, “In this regard, the Pakistani Navy provided an idea for the security of the Indian Ocean,” adding that “We hope the naval forces of Iran will cooperate with the navy of Pakistan to implement the plan.”

For his part, the governor of Hormozgan, Fereydoon Hemmati said in the meeting, “Interactions and exchanging of thoughts and experiences between Iranian and Pakistani navies will bring good results and achievements for both countries.”

Mentioning to the presence of the foreign forces in the region, Fereydoon Hemmati stated, “The presence of such forces is aimed at creating divisions among regional countries which we must annihilate the ominous plot through more interactions and cooperation.”

At a meeting with commanders of a Pakistani naval flotilla, Islamic Revolution Leader’s representative in Hormozgan province said that Iranian and Pakistani armies can ensure the security of the region and that there is no need for the presence of US forces here.

Leader’s representative went on to say that these visits make Muslim countries happy and bring about unity in the Muslim world.

Both Iran and Pakistan enjoy powerful armies and also have common culture and religion, said Naeimabadi, adding that these commonalities lead to friendly relations between the two neighboring states.

Commander Salem, in turn, expressed happiness over friendly ties between Tehran and Islamabad.

He said that this visit proves the Pakistani army’s interest in Iran, adding that there are very few countries with which Pakistan has this kind of intimate relations.

Appreciating Leader’s views and supports for resolving the crisis in Kashmir, the commander went on to say that Pakistani people respect the leadership of Ayatollah Khamenei.