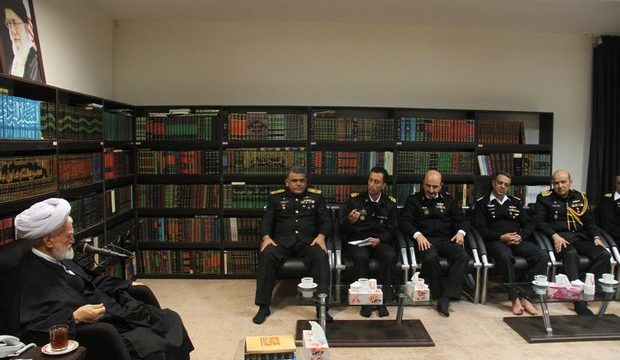 MNA – Islamic Revolution Leader’s representative in Hormozgan province said that Iranian and Pakistani armies can ensure the security of the region and that there is no need for the presence of US forces here.

Ayatollah Gholamali Naeimabadi made the remarks Sunday night in Bandar Abbas at a meeting with commanders of a Pakistani naval flotilla.

A Pakistani Navy flotilla comprising four Navy ships docked at Bandar Abbas on Sunday in a step to strengthen military ties between the two countries.

Leader’s representative went on to say that these visits make Muslim countries happy and bring about unity in the Muslim world.

Both Iran and Pakistan enjoy powerful armies and also have common culture and religion, said Naeimabadi, adding that these commonalities lead to friendly relations between the two neighboring states.

He said that this visit proves the Pakistani army’s interest in Iran, adding that there are very few countries with which Pakistan has this kind of intimate relations.

Appreciating Leader’s views and supports for resolving the crisis in Kashmir, the commander went on to say that Pakistani people respect the leadership of Ayatollah Khamenei.