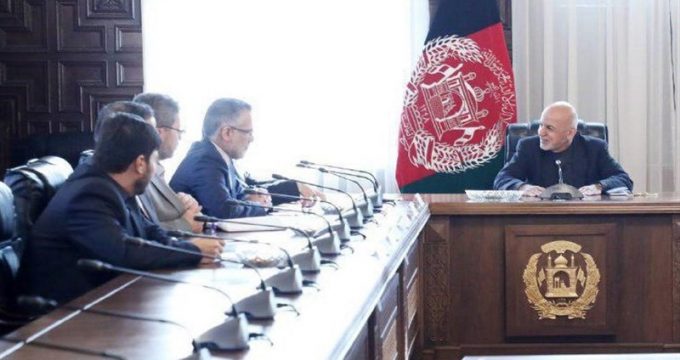 According to Afghan Voice Agance (AVA), Iran’s Deputy Foreign Minister for Political Affairs Seyed Abbas Araghchi, who arrived in the Afghan capital Kabul this morning to confer over a host of bilateral and regional issues, met and talked with the Afghan President Ashraf Ghani in the afternoon.

According to a statement issued by the Afghan Presidential Palace, the two officials discussed and exchanged views on the importance of a fully-fledged government-to-government relationship, a peace process led by Afghans and how to better use the Iranian port of Chabahar.

Araghchi also presented a report on a recent meeting between Iranian officials and a Taliban delegation in the Iranian capital of Tehran and reassured the Iranian government’s commitment to the principle of leadership and ownership of the Afghan government in the continuation of the peace process.

AVA added that in the meeting it was decided that the issues related to Afghanistan in all its aspects will be coordinated to yield effective results.

According to the Afghan news website, the continuation of the two countries’ talks to finalize a comprehensive strategic partnership document, as well as Taliban delegation’s talks in Tehran were the two most important issues on the agenda of Araghchi and his accompanying delegation’s visit to Kabul and their meetings with Afghan officials.