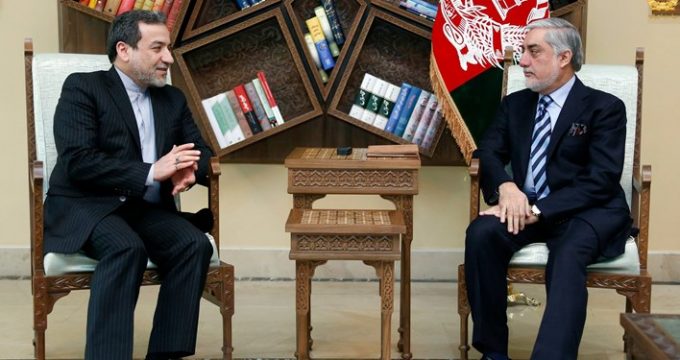 IRNA – Deputy Foreign Minister for political affairs Abbas Araqchi conferred on Saturday with Chief Executive of the Islamic Republic of Afghanistan Abdullah Abdullah on continued cooperation between the two countries.

During the meeting, both sides highlighted historical and friendly ties between the two countries, and said talks are underway to finalize comprehensive joint Tehran-Kabul cooperation document.

He expressed the hope that the final document would be signed by both sides’ leaders at the earliest.

Chief executive of the Islamic Republic of Afghanistan is well-aware of Iran’s negotiations with Taliban delegation in Tehran, Araqchi said.

Abdullah Abdullah, for his part, appreciated the visit by Iranian envoy and conveyed his gratitude to senior Iranian officials.

He noted that relations between Iran and Afghanistan are very consolidated, and expressed the hope that comprehensive document would be signed as soon as possible.

The Islamic Republic of Iran has fully observed principles in having talks with terrorist groups and acknowledged Afghan government on trend of talks with Taliban group, he said.

Afghan government backs restoration of peace in the country, but is not able to sacrifice its achievements in recent years, he said.

Abdullah lauded the significant role of Iran in supporting and hosting Afghan refugees and called for expansion of cooperation between the two sides.