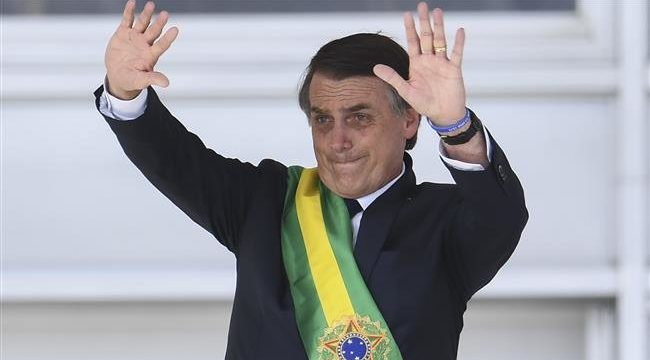 Press TV – Brazil’s new President Jair Bolsonaro has reaffirmed his plan of relocating the country’s embassy in the Israeli capital to the occupied Jerusalem al-Quds.

“The decision is taken, it’s only a matter of when it will be implemented,” said the ultra-right-wing leader late Thursday during an interview with Brazil’s SBT Television, confirming a reported statement by the Israeli regime’s Prime Minister Benjamin Natanyahu, who attended Bolsonaro’s inauguration ceremonies on January 1.

“A large part of the Arab world is aligned or aligning itself with the United States,” claimed the Brazilian president, who has widely been referred to as “Trump of the Tropics” due to his radical approaches similar to US President Donald Trump. “The Palestinian issue is already overloading people in the Arab world for the most part.”

Blaming Iran as the major vocal opposition against the embassy move, Bolsonaro further added that “the only weighty voice speaking out against me is Iran.”

Iran has not been the only country firmly opposing the US-led embassy move to the occupied al-Quds as many Muslim and non-Muslim countries have officially or informally expressed opposition to the move amid many protest rallies in different countries against Washington’s anti-Palestinian measure.

Bolsonaro further underlined that he did not think that most Arab countries would take retaliatory measures against Brasilia, noting, however, that “more radical” Arab nations “might adopt some sort of sanction — I hope only economic ones — against us.”

He did not elaborate in his pointed remarks which Arab countries he was referring to as “more radical.”

Bolsonaro had backtracked on the embassy move soon after declaring in early November that he intended to go through with it.

In an apparent response to fears of the farming businesses in the agriculturally-rich country that an embassy move may threaten their $1 billion in meat exports to Arab markets, the newly-elected leader rowed back his pledge within days, insisting: “it is not yet decided.”

Bolsonaro’s decision on the embassy move is highly controversial since the Israeli regime claims all of occupied al-Quds as its capital while Palestinians view the eastern part of the holy city as the capital of a future state.

Most countries across the globe hold that the status of al-Quds should only be determined through negotiations, which have long stalled by Tel Aviv’s continued violations of UN Security Council resolutions against further expansion of illegal Israeli settlements in the occupied Palestinian territories.

So far, only the US and its client Central American state of Guatemala have opened embassies in occupied al-Quds. While Paraguay has backtracked on a similar decision, Washington and Tel Aviv are reportedly pressuring US-backed government of Honduras to move its Israeli embassy to al-Quds as well.

In yet another controversial move, Bolsonaro also announced his readiness to discuss the possibility of hosting a US military base in Brazil, pointing to a major shift in the foreign policy of Latin America’s largest and most populous country.

The 63-year-old former Army captain represents a sharp break with Brazil’s recent record of left of center policies, veering his nation sharply to the right and towards the Trump administration in the US.

During the Thursday interview he also expressed concerns about growing Russian support for what he referred to as the Venezuelan “dictatorship” led by President Nicolas Maduro, who remains a target of Washington’s so-called regime-change foreign policy.