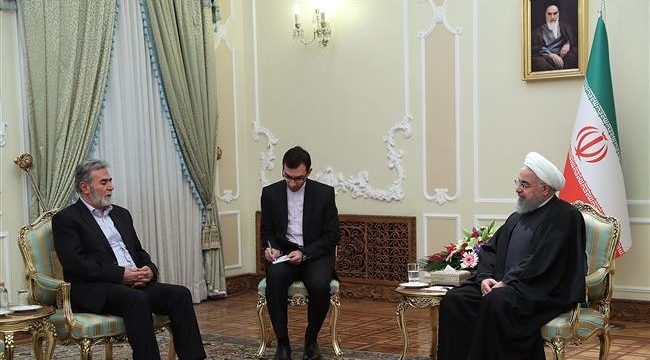 Only way for Palestinians to gain own rights is resistance: Rouhani

Press TV – Iranian President Hassan Rouhani has described resistance against the Israeli regime as the only way for the Palestinian nation to obtain its own rights, stressing that all Muslims must support the Palestinians’ right of return and establishment of an independent Palestinian state with Jerusalem al-Quds as its capital.

In a meeting with Secretary General of the Palestinian Islamic Jihad resistance movement Ziad al-Nakhala in Tehran on Tuesday evening, Rouhani said Iran has been a staunch supporter of the Palestinian nation ever since the 1979 Revolution, led by late Imam Khomeini.

He then praised the Palestinian nation’s 70-year-long steadfastness in the face of Zionists’ expropriation, injustice and occupation, stating that their struggle should continue until the Tel Aviv regime acknowledges their rights.

“The Zionist regime (of Israel), thanks to support from the new rulers of the White House, is seeking to assert control over the entire (Middle East) region; and Palestine is a part of such a complex plot,” the Iranian president noted.

Nakhala, for his part, briefed the Iranian president on the latest developments in the occupied Palestinian lands, and the capabilities of Palestinian resistance groups.

“Undoubtedly, the Islamic Republic of Iran’s support and principled policies have played a major role in thwarting attempts aimed at stripping the Palestinian nation of their rights,” he pointed out.

Nakhala also highlighted that the Palestinian nation, irrespective of ongoing pressures and threats, will continue its resistance against the Israeli regime until all its rights are recognized.

Earlier on Tuesday, Iranian Foreign Ministry Spokesman Bahram Qassemi warned against plots hatched by the United States and the Israeli regime to isolate Palestine, saying the Islamic Republic pursues a “clear, transparent and unchangeable” stance on the Arab country.

“We have constant contacts with different Palestinian groups with sometimes different viewpoints,” he said.

Qassemi added that the US and Israeli regime seek to create rift and division among Muslim countries to distract them from the Palestinian issue as the top priority in the Muslim world.

“This requires more unity in the Muslim world and all of us must make efforts to solve this big global problem,” the Iranian spokesperson said.

He added that the occupying Israeli regime with an aggressive nature which is killing and suppressing the Palestinian people would face an “unfavorable” fate.

Qassemi emphasized that the Palestinian people would achieve a final victory over the Tel Aviv regime through their resistance.