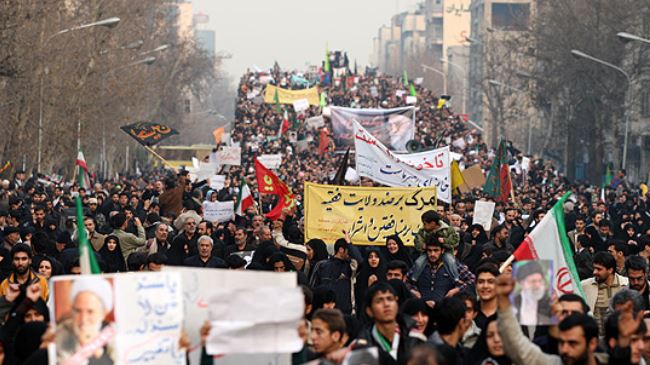 Press TV – The Iranian nation is set to commemorate the anniversary of the 2009 mass rallies that were held in support of the Islamic Republic and put an end to post-election unrest back then.

People from all walks of life plan to take part in demonstrations and ceremonies on Sunday in several Iranian cities to mark the “Dey 9 epic feat,” which refers to the historic rallies held on the ninth day of the Persian calendar month of Dey.

On December 30, 2009, millions of Iranians held rallies in the capital Tehran and several other cities to condemn the foreign-orchestrated unrest, which had erupted following the presidential elections earlier that year.

People were especially angered by incidents that had taken place days earlier in Tehran, where a group of opportunists had offended the sacred values of the nation on the day of Ashura, the martyrdom anniversary of Imam Hussein (PBUH), the third Shia Imam.

The unrest was orchestrated by Mehdi Karroubi and Mir Hossein Musavi, two of the candidates who had lost the election. They claimed that the results had been rigged. Both remain under house arrest on charges of provoking the public and harming national security.

Iran has also sporadically been the scene of some economy-related protests over the past year or so, with some foreign states and entities seeking to take advantage of the conditions to foment violence in the Islamic Republic.

Price hikes triggered demonstrations late last December in a number of Iranian cities, including Tehran and Mashhad, with the participants demanding the administration of President Hassan Rouhani resolve the economic woes.

Several arrests were made during the gatherings, which were organized without permits from relevant authorities. Local officials said those arrested were trying to damage public property.

Police also exercised restraint in bringing the situation under control.

On January 9, Leader of the Islamic Revolution Ayatollah Seyyed Ali Khamenei said a “triangle” of enemies – with the United States and Israel comprising one of its sides, a rich Persian Gulf littoral state on its second side and the anti-Iran MKO terrorist organization on the third side – has been plotting for the past few months to incite chaos and violence in Iran.

“The plot has been hatched by Americans and Zionists. They have been working on it for several months, planning to begin from small towns and then move on towards the center. The cash comes from one of the filthy rich Persian Gulf littoral states. Obviously, such projects need money, but the Americans won’t be willing to spend anything as long as they have these [rich allies],” the Leader said.

A US-backed campaign, known as the Hot Summer Project, to stir up unrest in Iranian cities also fell flat this year. The effort sought to whip up public anger over water and electricity shortages in the face of a protracted drought.

Ayatollah Khamenei added that the third side of the triangle was the “murderous” MKO, whose elements served as their lackeys on the ground.

Also Addressing the families of Iranian martyrs in a meeting in Tehran on December 12, Ayatollah Khamenei underlined Washington’s stepped-up campaign against Iran over the past two years, saying the Americans sought to increase pressure on the country through sanctions and measures to disrupt its national security with the aim of creating division and conflict among various groups.

“They were planning to lead some to the streets and had even referred to it as ‘the Hot Summer.’ To the enemies’ dismay, [however], this past summer was one of the best ever,” the Leader stated.

As part of its bids to exert pressure on the Iranian people, the US has also re-imposed sanctions on the Islamic Republic.

US President Donald Trump withdrew his country in May from the landmark Iran nuclear deal, officially known as the Joint Comprehensive Plan of Action (JCPOA), and decided to re-impose unilateral sanctions against Tehran.

In November, the Trump administration announced the re-imposition of the “toughest” sanctions ever against Iran’s banking and energy sectors with the aim of cutting off the country’s oil sales and crucial exports.