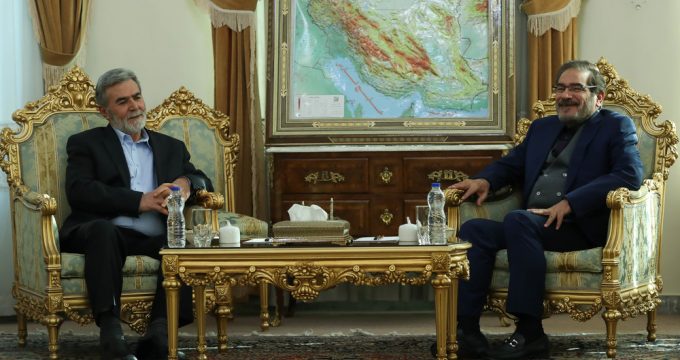 Tasnim – Secretary of Iran’s Supreme National Security Council Ali Shamkhani took a swipe at the Zionist regime of Israel for launching a media propaganda to whitewash its atrocities against Palestinians in the shadow of Takfiri barbarism.

In a Sunday meeting with Secretary General of the Palestinian Islamic Jihad resistance movement Ziad al-Nakhala in Tehran, Shamkhani reaffirmed the Islamic Republic’s commitment to supporting the Palestinian nation until the ultimate victory for the axis of resistance.

He added that Zionist media outlets have launched massive propaganda to overshadow the serious crimes that Israel is committing against people of Palestine against the backdrop of the barbaric activities of Takfiri terrorist groups.

Shamkhani further denounced the overt and covert support from certain Arab states for the so-called “deal of the century” initiated by the US, warning that implementation of the so-called peace plan will deal a heavy blow to the Palestinian nation.

For his part, the Palestinian official hailed Iran as a true supporter of the cause of Palestine.

Nakhala also said that the axis of resistance’s capability to fight off aggressors has been materialized in the massive wave of protests known as the Great March of Return, in Israel’s defeat in its recent aggression, and in the Zionist regime’s decision to hold snap election.

Back in May, Leader of the Islamic Revolution Ayatollah Seyed Ali Khamenei said Palestine would finally be freed from the clutches of enemies and that Jerusalem al-Quds would be the capital of Palestinian state despite US attempts to distort this reality.

“God willing, Palestine will be liberated from the grip of enemies and America and its stooges will not be able to a damn thing vis-à-vis truth and the divine tradition,” the Leader said.