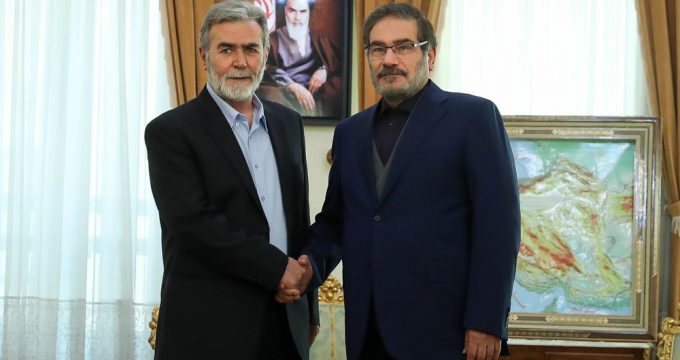 Conscious nations of region to avoid “Deal of the Century”: Shamkhani

During the meeting, Shamkhani insisted on continuous support to Palestinian resistance’s aspiration as a basic principle of Iran’s foreign policy, saying, “We’ve always been supportive to the resistant and oppressed Palestinian people since the very start of Islamic Republic of Iran’s establishment which was inspired by our religious and humane beliefs and will continue until the complete victory of resistance process”.

Mentioning the support of some Arabic countries from US’ colonial plan known as “Deal of the century”, the official said, “Implementation of the plan is a great blow to Palestine and resistance groups. Conscious nations of the region will avoid the ominous intention”.

Pointing to the continuous victories of public movements against terror groups supported by US, Israel and Saudi Arabia in Iraq, Syria and Yemen, Secretary of Iran’s Supreme National Security Council said, “The victories will accelerate realization of Palestinians’ aspirations”.

The Secretary-General of Islamic Jihad Movement, Ziyad al-Nakhalah for his part, described Iran as a “true supporter” of Palestine’s aspiration.

He also presented a report on Islamic Jihad Movement’s election.