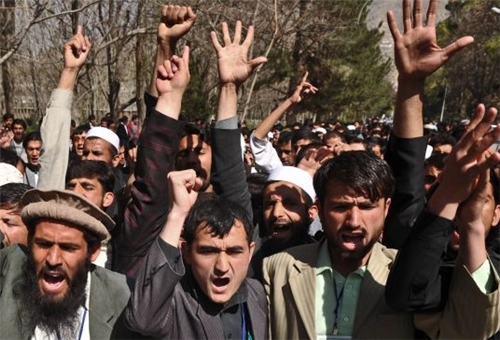 “Iran seeks a stable Afghan government that is responsive to Iranian goals, the elimination of ISIS-K, the removal of the US/NATO presence, and the protection of Iranian concerns, such as water rights and border security,” the US Department of Defense said in a report sent to Congress this week.

The Pentagon also admitted Iran’s influence in Afghanistan, saying that Tehran pursues “a multitrack strategy” of engaging with the Afghan government and seeks to boost bilateral economic ties with Kabul.

“Iranian involvement is most prominent in western, central, and northern Afghanistan, where local Afghans share common history, culture, religion, and language with Iran,” according to the report.

The report comes as Iran has announced it is engaged in negotiations with the Afghan Taliban to help settle the existing security challenges facing the neighboring country.

Tehran’s announcement came after US President Donald Trump had ordered a withdrawal of nearly half of the American forces stationed in Afghanistan, more than 17 years after Washington and its allies invaded Afghanistan.

The invasion overthrew the Taliban regime. But US forces have remained bogged down there through the presidencies of George W. Bush, Barack Obama and now Trump.

Taliban militants have warned that they will be stepping up their attacks until the US forces fully withdraw from Afghanistan after more than a decade and half of occupation.

Meanwhile, the Daesh terror group has also taken advantage of the chaos to establish a foothold in Afghanistan, further complicating the Afghan government’s efforts to uproot terrorism.

During a visit to Afghanistan on Wednesday, Ali Shamkhani, the Secretary of Iran’s Supreme National Security Council (SNSC), said Tehran had been holding a series of talks with the Taliban group “with the knowledge of the Afghan government” and would continue to do so in the future.

Shamkhani made the comments during a meeting with Hamdullah Mohib, the Afghan president’s national security adviser in the capital Kabul.

During his talks with Karzai, Shamkhani slammed Washington’s double standards in its so-called fight on terror, describing the US presence in the region as a main cause of instability and insecurity.

Karzai, for his part, praised Iran’s support for Afghanistan, saying the Afghan people and government are confident that the Islamic Republic would play effective role in promoting peace in Afghanistan.

In an address to the Geneva Conference on Afghanistan last month, Iranian Foreign Minister Mohammad Javad Zarif called on the international community to facilitate “inclusive” dialog between the Afghan Taliban and the government in a bid to restore peace to the conflict-plagued country.