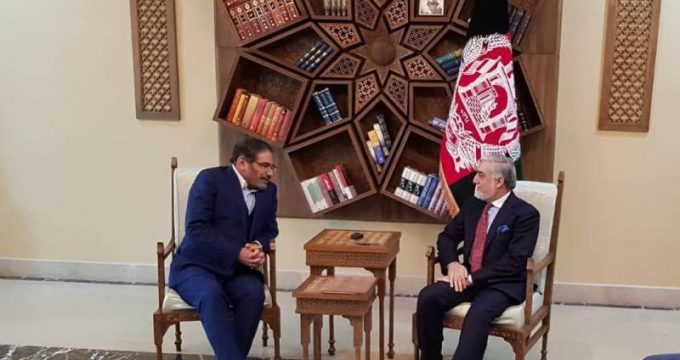 IRNA – Secretary of the Supreme National Security Council considered the US strategy in the region to be permanent domination with the maximum looting and minimal cost.

In a meeting with Chief Executive of the Islamic Republic of Afghanistan Abdullah Abdullah, Ali Shamkhani underlined that the launch of the proxy wars and the creation of Takfiri terrorist group are planned in this ground.

Shamkhani called for increased level of cooperation in all areas, given the importance of Iran-Afghanistan relations to the interests of the two countries and the security and stability of the region.

Declaring the Islamic Republic of Iran’s support for the peace process in Afghanistan with an inter-Afghan approach, the SNSC Secretary considered any act contrary to this process to be detrimental to the security and stability of Afghanistan.

Shamkhani described comprehensive planning, continuous cooperation and close coordination with the countries of the region to eradicate the root-causes of creation and expansion of terrorism as a principled measure to combat terrorism, adding that the holding of the first regional security conference with the presence of national security advisers and secretaries of Iran, Russia, China, India and Afghanistan in Tehran were an important step in this direction.

Afghanistan’s Chief Executive Abdullah Abdullah also welcomed the constructive engagement of the two countries’ security institutions, saying, ‘The most important challenge for Afghanistan today is the existence of a worrying security challenge and the overcoming of this situation requires the cooperation and constructive efforts of the neighbors to stabilize and secure Afghanistan.’

Referring to the efforts of known terrorist groups in Afghanistan to use the means of violence and bloodshed in order to impose their will on the legal government of the country, he noted, Afghan parliamentary elections showed that the political will of our people should only be through ballot boxes without pressure and terrorist threats.

The representative of Iran Supreme Leader Ayatollah Seyyed Ali Khamenei and the secretary of the Supreme National Security Council Ali Shamkhani arrived in Kabul on Wednesday.

On the one-day visit, Shamkhani was accompanied by some security, political and military officials.