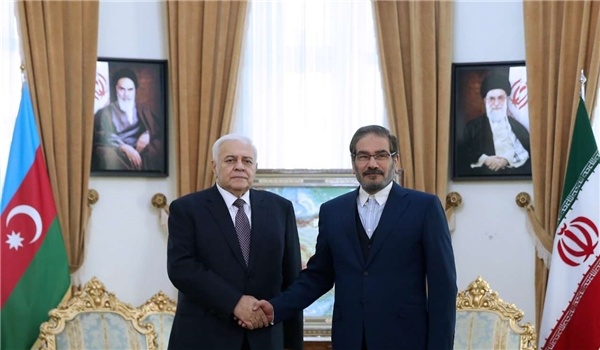 FNA – Secretary of Iran’s Supreme National Security Council (SNSC) Ali Shamkhani, in a Tuesday meeting with Speaker of the National Assembly of Azerbaijan Republic Ogtay Asadov in Tehran, highlighted the commonalities between the two neighboring countries, and called for more cross-border interactions.

Shamkhani described the huge amount of cultural, civilized, religious, linguistic and ethnic commonalities between Iran and Azerbaijan as a unique asset for development and expansion of relations that could benefit the region.

The top security official pointed to the efforts and actions of some countries opposing friendly relations between the two countries in order to strike at the strong ties between Tehran and Baku and added, “The security of the countries of the region is collectively secured by adopting common approaches and holding talks as well as close interactions.”

Shamkhani said that some countries have sold their national security to the will and decision of transnational nations and believe that the United States can guarantee their survival, while the only way for governments to continue is relying on national capacities and popular support.

Heading a high-ranking delegation, Asadov met with President Hassan Rouhani and his counterpart Ali Larijani earlier today. The officials discussed a host of issues including the development prospects of bilateral cooperation, as well as security issues.

In relevant remarks in late March, President Hassan Rouhani underlined that expansion of mutual cooperation between Tehran and Baku would not be harmful to any third party state.

“I am delighted that with the extensive efforts of senior officials from both countries, we are witnessing the good results of our joint cooperation today; cooperation which benefits not only the two nations, but the whole region,” Rouhani said.

“It means that our cooperation is in the interests of the people of the region and the whole world,” President Rouhani added.