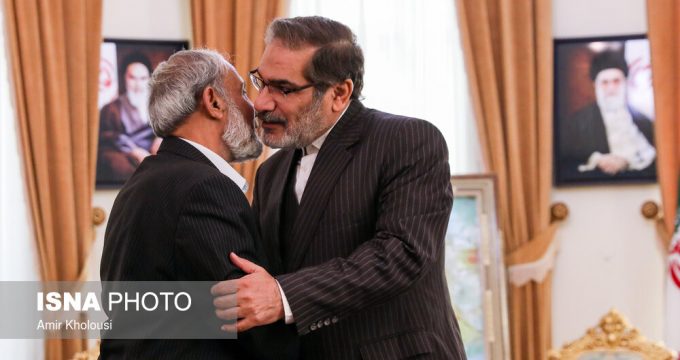 December 25, The Iran Project – Heading a Palestinian parliamentary delegation, Mahmoud al-Zahar, the co-founder of Hamas and a member of the Hamas leadership in Gaza Strip, arrived in the Iranian capital on Saturday (Dec. 22) for key talks.

In a meeting with Mahmoud al-Zahar, Larijani reiterated the Islamic Republic’s support for Palestine, stressing the importance of making more efforts to expose brutal crimes committed by the Israeli regime against the oppressed Palestinian nation.

He expressed hope that “all countries in the region and across the world will boost their support for the Palestinian resistance movement (Hamas) so that this movement becomes stronger day by day.”

Zahar, in turn, praised Iran’s support for the Palestinian people and officially invited Larijani to make a visit to the enclave.

The Hamas official emphasized that al-Quds was a pivotal issue for all freedom-seeking nations in the world.

During  a meeting with Zahar, Ali Akbar Velayati said, “The only way of survival in the face of the excessive demands and plots of Zionists and enemies is resistance and fortitude, and what is clear is that the axis of resistance is developing and getting stronger every day.”

Velayati also noted that the axis of resistance’s victories with its limited equipment reveals the power of Islam.

For his part, Zahar expressed gratitude to Iran for supporting the Palestinian nation, saying the Islamic awakening movement is growing and will lead to resistance’s ultimate victory.

In a meeting with Hamas leadership in the Gaza Strip, the Iranian Foreign Minister once again stressed the Islamic Republic’s principled policy to support Palestine, urging all countries in the Muslim world to boost their unity to defend the Palestinian cause.

Zarif stated that efforts to counter the Palestinian resistance are unfortunately being made from inside the Muslim world, saying that all countries and Islamic movements are also under such pressure.

Meanwhile, Mahmoud al-Zahar pointed to Iran’s real support for Palestine, saying Palestinians hope that the Zionists’ project will come to an end by the support of the Islamic World for the cause of Palestine.

Supporting cause of Palestinian people and freedom of al-Quds are of the most important priority of the Islamic world, he said, adding, “Any move that leads to the deviation in the course of fighting against Zionist regime, as the main threat to the Islamic world, is considered as a flagrant tyranny to the Muslims across the globe.”

Zahar, for his part, said, “The position adopted by the Islamic Republic of Iran will always be influential and constructive in this regard.”