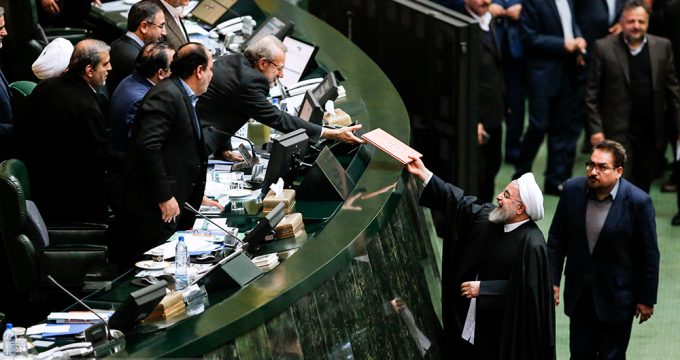 President Hassan Rouhani presented an annual state budget of 4,700 trillion rials ($47 bln at the free market rate) to parliament on Tuesday, saying U.S. sanctions would affect Iranians’ lives and growth but not bring the government to its knees.

The Supreme Leader of the Islamic revolution—Imam Khamenei— issued a message, expressing condolences for the passing of the great faqih, the chairman of the Expediency Discernment Council, Ayatollah Hashemi-Shahroudi.

Iranian Foreign Minister Mohammad Javad Zarif on Monday renewed warnings to the European Union to speed up launch of its long-awaited Special Purpose Vehicle (SPV) that is to enable banking and trade with Iran to keep the country under the nuclear deal after the US retreat last April.

President Rouhani in a messages, congratulated the world leaders on the birthday of the prophet of peace and friendship, Jesus Christ (PBUH) and the beginning of year 2019.

Iran’s Ambassador to Iraq Iraj Masjedi in a message on Monday congratulated Christian officials and followers of the divine religion in Iraq on the new year.

A bus carrying students at a university in northwest Tehran rolled onto its side on Tuesday, killing at least 7 people.

Commander of Iranian Navy Rear Admiral Hossein Khanzadi said the technical cooperation between the naval forces of Iran and Russia will further increase in the future.

Iran’s Intelligence Ministry arrested members of a major network that had swindled the country’s banks out of millions of euros by infiltrating into the banking system.